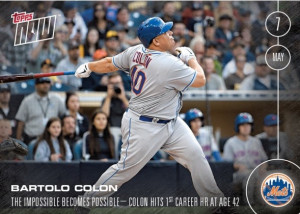 The Topps Company today announced that their fast-growing on-demand platform TOPPS NOW™ surpassed 500,000 cards sold in the first year, exceeding the expectations of the program and helping to re-engage thousands of fans, especially millennials, with the TOPPS brand and the joys of collecting now in an on-demand environment for the first time. Fans were able to order an unlimited amount of cards in 24 hours, which TOPPS produced on demand. The cards were then delivered in a few days, where in past years fans had to wait until the next year’s set to collect the images. The company finished the run last week with a set celebrating the Chicago Cubs.

“This is something we’ve wanted for a long time, a way to turn product around very quickly and give fans something to remember events as they were happening,” said Jeff Heckman, Topps director of new product development and e-commerce marketplace. “We’ve finally refined the model, and it’s exceeded our wildest expectations.”

Topps produced 665 different MLB cards during the initial season of TOPPSNOW, with many points of the season receiving multiple cards to chronicle that day’s events, as well as team sets for each of the 10 playoff clubs. Over 500 moments have been highlighted with cards, ranging from Ichiro Suzuki’s 3,000th hit, to rookie appearances, no-hitters, amazing catches and dramatic battles on the diamond, all of which are available same day for fans and are delivered via mail in 3-5 business days. All 30 teams received more than one card, with the Chicago Cubs (38 cards plus postseason), Boston Red Sox (36 plus postseason), and the New York Yankees (28) having the most. The top players in the regular season were David Ortiz with eight cards, and Ichiro and Chicago’s Kris Bryant with six each. TOPPS has also sold over 9,000 sets of Chicago Cubs World Series sets as well.

Forty one of the cards also featured autographs or game used memorabilia on a limited basis.

Ichiro’s 3,000th hit had the one day sales record of over 11,550 cards sold, with the New York Mets’ Bartolo Colon second with over 8,000 cards delivered following the All-Star pitcher’s unbelievably glorious home run against the San Diego Padres in May. The Cubs World Series winning card was third with over 6,000 sold, followed by Aaron Judge and Tyler Austin from the New York Yankees had the 4th most cards sold at over 5,000 when they hit back-to-back home runs in their first MLB plate appearances in August. The first TOPPS NOW commemorative relic card offer which featured All-Star Game MVP Eric Hosmer of the Kansas City Royals sold out in just 20 minutes.

The platform has also been launched with TOPPS partners like the UFC, the Premier League, Major League Soccer, and WWE and those will also be expanded in the coming months.

Jerry Milani is a freelance writer and public relations executive living in Bloomfield, N.J. He has worked in P.R. for more than 30 years in college and conference sports media relations, two agencies and for the International Fight League, a team-based mixed martial arts league, and now is the PR manager for FAN EXPO, which runs pop culture and celebrity conventions across North America. Milani is also the play-by-play announcer for Caldwell University football and basketball broadcasts. He is a proud graduate of Fordham University and when not attending a Yankees, Rams or Cougars game can be reached at Jerry (at) JerryMilani (dot) com.
@gbpackjerry
Previous DGital Media and Sports Illustrated To Launch ‘The Seth Davis Podcast’ On November 15
Next Joe Buck Discussion/Booksigning at Yogi Berra Museum Nov. 17