Home / News / 2017 Beat The Streets Benefit To Stream Live On FloWrestling Wednesday, May 17

2017 Beat The Streets Benefit To Stream Live On FloWrestling Wednesday, May 17 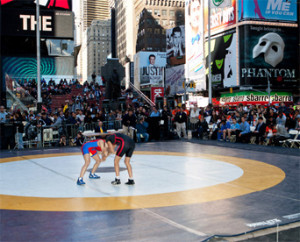 For the third straight year FloSports is excited to announce that FloWrestling (www.flowrestling.org) will once again live stream the Beat The Streets New York City event, Wednesday, May 17, from Times Square. This year’s event will feature wrestlers from three Beat the Streets’ city programs in addition to the featured matchup between Team USA and Team Japan.

“We are proud to be working for a third straight year with Beat the Streets New York to allow fans from across the globe to enjoy this unique celebration of the sport of wrestling,” said Joe Williamson, FloWrestling general manager. “FloSports offers the most comprehensive coverage of wrestling anywhere, and we couldn’t be more pleased to be a part of helping spread the word of this important cause.”

The broadcast, accessible from http://www.flowrestling.org/event/255255-2017-beat-the-streets-times-square, will begin at 3 p.m. ET on Wednesday with matches that highlight wrestlers from the Beat the Streets program. At 4:45 p.m., the New York City PSAL Girls Dual Meet Championships will take place, with Team Japan taking on the United States following at 6 p.m., following a special matchup between top young stars Austin DeSanto and Daton Fix. During the Iran vs USA match, BTSNY will present their annual outstanding awards to student athletes from the BTS program.

Jerry Milani is a freelance writer and public relations executive living in Bloomfield, N.J. He has worked in P.R. for more than 30 years in college and conference sports media relations, two agencies and for the International Fight League, a team-based mixed martial arts league, and now is the PR manager for FAN EXPO, which runs pop culture and celebrity conventions across North America. Milani is also the play-by-play announcer for Caldwell University football and basketball broadcasts. He is a proud graduate of Fordham University and when not attending a Yankees, Rams or Cougars game can be reached at Jerry (at) JerryMilani (dot) com.
@gbpackjerry
Previous Ted Williams 1955 Boston Red Sox Contract Tops Steiner Sports Spring Fever Auction with $48,456 High Bid
Next Topps Now To Offer Special Jeter Card on Monday