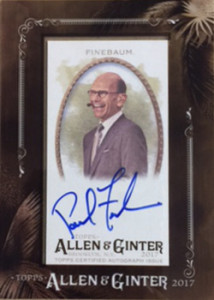 Topps Allen & Ginter, a retro series of cards, features autographed cards of champions from the around the world, celebrities, and top athletes. A&G has been around for more than a decade showcasing the best of the best along with baseball cards of today’s hottest stars such as rookie autographs of phenoms Aaron Judge and Cody Bellinger.

Others from the sports media world with cards in the set include Ken Rosenthal, Andy Katz, Alexa Datt, Jayson Stark and Tom Rinaldi.

Among the other fun pulls are one of Gene Hackman as Coach Norman Dale in Hoosiers and fellow actors William Shatner and Tom Arnold.

Jerry Milani is a freelance writer and public relations executive living in Bloomfield, N.J. He has worked in P.R. for more than 30 years in college and conference sports media relations, two agencies and for the International Fight League, a team-based mixed martial arts league, and now is the PR manager for FAN EXPO, which runs pop culture and celebrity conventions across North America. Milani is also the play-by-play announcer for Caldwell University football and basketball broadcasts. He is a proud graduate of Fordham University and when not attending a Yankees, Rams or Cougars game can be reached at Jerry (at) JerryMilani (dot) com.
@gbpackjerry
Previous The Overwatch League™ Partners with Sports, Esports Leaders to Build Teams for Major Cities Worldwide
Next Mylan World TeamTennis Partners With ESPN To Introduce First In-Match Player Microphones During Professional Tennis Competition