‘Foreman’ To Premiere on EPIX Sept. 13 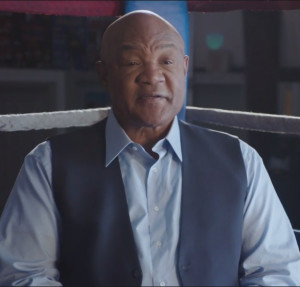 Here’s a first look at the trailer for the EPIX documentary ‘Foreman,” which premiers on Wednesday, Sept. 13, at 8 p.m. ET. Produced by George Foreman Jr. as a way to tell the story of his dad, along with an all-star production team, the documentary tells the story of the ups and downs of boxer, world champion, entrepreneur and businessman George Foreman.

In 1994, at the age of 45, George Foreman completed the greatest comeback in the history of heavyweight boxing. Not only did he reclaim the heavyweight championship crown that was lost in spectacular fashion 20 years earlier to Muhammad Ali, but he went on to complete an unparalleled personal transformation – from reviled street bully to beloved teddy bear. Foreman is the unlikely story of a boxer who struggles with, and later establishes, a sense of purpose on his remarkable journey to achieve the impossible.

Foreman is directed by Chris Perkel (Clive Davis: The Soundtrack of Our Lives) and executive produced by Gary Cohen (Catching Hell, Requiem for the Big East). George Foreman Jr. is producer on the project as well as Matt McDonald (Catching Hell, Requiem for the Big East) and edited by Ross Hockrow (Gods or Men). Ross Bernard is also an executive producer; Jill Burkhart and Valerie Bishop Pearson serve as producers.

Jerry Milani is a freelance writer and public relations executive living in Bloomfield, N.J. He has worked in P.R. for more than 30 years in college and conference sports media relations, two agencies and for the International Fight League, a team-based mixed martial arts league, and now is the PR manager for FAN EXPO, which runs pop culture and celebrity conventions across North America. Milani is also the play-by-play announcer for Caldwell University football and basketball broadcasts. He is a proud graduate of Fordham University and when not attending a Yankees, Rams or Cougars game can be reached at Jerry (at) JerryMilani (dot) com.
@gbpackjerry
Previous Phil Simms Joins SiriusXM’s Mad Dog Channel as NFL Analyst
Next Proceeds From Topps NOW Card For Astros Moment of Silence To American Red Cross