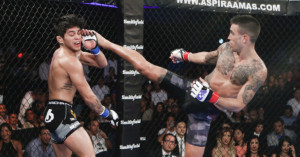 The agreement marks the first time ever that Univision Deportes will produce and distribute live MMA programming and, in 2018, will include a total of 16 television airings, beginning with a live, 90-minute broadcast on Univision (12am ET/ 12am PT) and UDN (12am ET/ 9pm PT) of the recently announced “Combate Estrellas I” show at Shrine in Los Angeles, Calif. on Friday, April 13.

“We’re incredibly excited that our growth last year has culminated with a new partnership with Univision Deportes, a sports media brand that is home to some of the best sports and entertainment programming,” said Combate Americas CEO Campbell McLaren.

“Univision Deportes is proud to partner with Combate Americas in an effort to bring fans the best programming of one of the most popular sports today,” said Juan Carlos Rodriguez, President, Univision Deportes. “As the leading Spanish-language sports brand, our commitment to deliver high-quality sports content is reinforced through this new partnership, bringing fanáticos the top MMA events in a way that only Univision Deportes knows best.”

The complete 2018 schedule, which will be announced soon, will include several dates across Univision and UDN.

The live shows will all air in a 90-minute window and will follow the live stream of Combate Americas preliminary bout cards on UnivisionDeportes.com.

The live Univision broadcast of “Combate Estrellas I” will be headlined by a much-anticipated, bantamweight (135 pounds) rematch between John “Sexi Mexi” Castaneda (16-3), representing the U.S., and Marc “Lufo” Gomez (21-11), representing Spain.

The complete preliminary bout card, which will stream live on UnivisionDeportes.com, will be announced soon.

Since it launched its live event series in 2015, Combate Americas has emerged as a destination for the best, new fighters from the U.S., Latin America and Spain, and a platform pitting athletes, in a country versus country style format, facing each other in “La Jaula,” the Combate Americas competition cage.

Jerry Milani is a freelance writer and public relations executive living in Bloomfield, N.J. He has worked in P.R. for more than 30 years in college and conference sports media relations, two agencies and for the International Fight League, a team-based mixed martial arts league, and now is the PR manager for FAN EXPO, which runs pop culture and celebrity conventions across North America. Milani is also the play-by-play announcer for Caldwell University football and basketball broadcasts. He is a proud graduate of Fordham University and when not attending a Yankees, Rams or Cougars game can be reached at Jerry (at) JerryMilani (dot) com.
@gbpackjerry
Previous 2018 Major League Baseball Season Airs Nationwide on SiriusXM
Next ‘Voice of the Yankees’ Michael Kay to Receive Vin Scully Award for Excellence in Sports Broadcasting from WFUV Radio