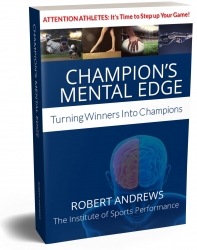 Robert Andrews, M.A., Founder and Director of Institute of Sports Performance, takes his extensive years of experience working with Olympic-winning athletes and adds his words of wisdom and experience into his latest book, Champion’s Mental Edge – Turning Winners into Champions, which launched March 29 – 31 for baseball’s opening weekend. River Oaks Bookstore hosted the live event on Saturday afternoon where hundreds of Robert’s fans joined him.

The release of Andrews’ book is the culmination of working 22 years in private practice as sports performance consultant and licensed therapist. Robert presents a concept and then backs it up with stories from elite athletes who applied that exact strategy or approach and achieved remarkable success. He also helps athletes overcome the mental and emotional impact of sports related injuries.

In Andrew’s practice, they offer mental training concepts and tools to athletes of all levels working with the entire system where the athlete trains and competes. They work closely not only with the athlete, but also the coaches, parents, physical therapists and more. By using this comprehensive approach, athletes reach their full potential by utilizing their mental, emotional and physical energy for performance. Their motto is “We Turn Winners into Champions.”

Andrews’ reputation has allowed him to work with a wide range of elite athletes from different sports activities and watch them become Olympic and World Champions, NFL, MLB, and NBA All Stars and All Pro’s, NCAA, National, Regional, and State Champions.

In the gymnastics arena, Robert has worked with Olympics all around, including team, floor and vault champion, Simone Biles, and Olympic Gold and Silver medalist and Dancing with the Stars Champion, Laurie Hernandez. He also has worked with other Olympic champions and athletes who won 13 medals at the Rio Olympics, seven of which were Olympic Gold Medals.

In Houston, Robert worked the Houston Texans and was with the Houston Rockets in the 2015-2016 season, when they had their best season in over twenty years. He also interacts with the University of Houston and Houston Baptist University athletic programs.

Jerry Milani is a freelance writer and public relations executive living in Bloomfield, N.J. He has worked in P.R. for more than 30 years in college and conference sports media relations, two agencies and for the International Fight League, a team-based mixed martial arts league, and now is the PR manager for FAN EXPO, which runs pop culture and celebrity conventions across North America. Milani is also the play-by-play announcer for Caldwell University football and basketball broadcasts. He is a proud graduate of Fordham University and when not attending a Yankees, Rams or Cougars game can be reached at Jerry (at) JerryMilani (dot) com.
@gbpackjerry
Previous PAC-12 Networks Announces Coverage Of 2018 Spring Championships
Next Nationwide to debut Walter Payton NFL Man of the Year-themed commercial