Jerry Milani May 14, 2018 News, On The Air Comments Off on BBC America’s Premier League Darts Hits The Bullseye Online 2,661 Views 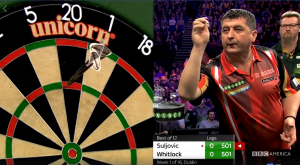 BBC AMERICA’s new darts series Premier League Darts is proving to be a hit online. The series has generated over 2 million livestream views to-date since its launch on February 1, growing +10x from the first half of the tournament. Livestream views consist of views on BBCAmerica.com and Facebook.

BBCA is the U.S. home to the world’s biggest darts tournaments: Premier League Darts and the World Darts Championship. A fan-fueled fringe sport phenomenon, darts is second only to football (aka soccer) as a televised sport in the UK.  It has the spectacle of wrestling, the stakes of poker and it has fans beyond anything you’ve seen in their enthusiasm.

“Darts as a spectator sport is all about extraordinary skill, high stakes and passionate spectacle,” remarked BBC AMERICA President and GM Sarah Barnett.  “It’s fantastic to see a US audience begin to embrace this global phenomenon.”

Jerry Milani is a freelance writer and public relations executive living in Bloomfield, N.J. He has worked in P.R. for more than 30 years in college and conference sports media relations, two agencies and for the International Fight League, a team-based mixed martial arts league, and now is the PR manager for FAN EXPO, which runs pop culture and celebrity conventions across North America. Milani is also the play-by-play announcer for Caldwell University football and basketball broadcasts. He is a proud graduate of Fordham University and when not attending a Yankees, Rams or Cougars game can be reached at Jerry (at) JerryMilani (dot) com.
@gbpackjerry
Previous NCAA Launches Transformative Statistics Initiative
Next United World Sports Announces Expanded Agreement With ESPN