Jerry Milani May 30, 2018 News, On The Air Comments Off on Collegiate Rugby On ESPN2, ESPNews This Weekend 1,343 Views 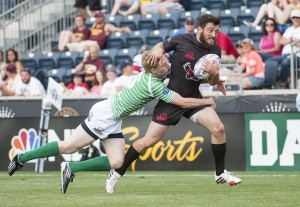 For the first time this weekend, competition in the 2018 Penn Mutual Collegiate Rugby Championship will be carried live on ESPN2, ESPNews and the new ESPN+ app.

Philadelphia is in the international sports spotlight this coming weekend, as the Olympic sport of Rugby 7s returns to Talen Energy Stadium for the 2018 Penn Mutual Collegiate Rugby Championship, Friday, June 1st through Sunday, June 3rd.
The three-day rugby festival is one of the largest gatherings of collegiate and high school rugby teams in the world, with over 30,000 fans anticipated to be in attendance.

All the other matches featured in-stadium will be covered live on ESPN+, the first-ever multi-sport, direct-to-consumer subscription streaming service from The Walt Disney Company Direct-to-Consumer and International segment and ESPN.

Jerry Milani is a freelance writer and public relations executive living in Bloomfield, N.J. He has worked in P.R. for more than 30 years in college and conference sports media relations, two agencies and for the International Fight League, a team-based mixed martial arts league, and now is the PR manager for FAN EXPO, which runs pop culture and celebrity conventions across North America. Milani is also the play-by-play announcer for Caldwell University football and basketball broadcasts. He is a proud graduate of Fordham University and when not attending a Yankees, Rams or Cougars game can be reached at Jerry (at) JerryMilani (dot) com.
@gbpackjerry
Previous Outdoor Weekly Debuts on CarbonTV
Next Fandom Sports Unleashes New Campaign To Reward Superfans With Creative Tattoos & Body Art