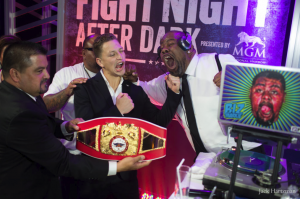 Fight For Children, the Washington D.C. based non-profit that has improved the health and well-being of at-risk children throughout the area for three decades, today announced an exciting lineup for its 29th annual Fight Night fundraiser. One of the most storied charity events of the year, the star-studded affair on Thursday, November 1 at the Washington Hilton will bring together nearly 2,000 leaders of business, government, philanthropy, sports, and entertainment for a memorable evening of fundraising, networking, boxing, and musical performances.

The organization’s mission is to provide at-risk children in Washington with access to high quality youth sports programming, and ensure they are active, socially and emotionally engaged, performing well in school and on a path to a successful future. Since the inaugural event in 1990, Fight Night has become one of the premiere events of the year and, through the generosity of its supporters and contributors, has raised more than $65 million.

“Fight Night is the engine that drives Fight For Children,” said Raul Fernandez Vice Chairman and Owner, Monumental Sports and Entertainment and Chairman of Fight For Children. “The overwhelming support we receive from our partners enables us to provide thousands of children in DC with incredible opportunities each year.”

·        MGM National Harbor presents the entertainment for the evening; including musical performances by E3, a special performance of the National Anthem from Bob McDonald and Caleb Green, and the evening’s headliner, multi-platinum rap performer Flo Rida

Jerry Milani is a freelance writer and public relations executive living in Bloomfield, N.J. He has worked in P.R. for more than 30 years in college and conference sports media relations, two agencies and for the International Fight League, a team-based mixed martial arts league, and now is the PR manager for FAN EXPO, which runs pop culture and celebrity conventions across North America. Milani is also the play-by-play announcer for Caldwell University football and basketball broadcasts. He is a proud graduate of Fordham University and when not attending a Yankees, Rams or Cougars game can be reached at Jerry (at) JerryMilani (dot) com.
@gbpackjerry
Previous Goodyear Celebrates 100 Years of Wingfoots by Creating Oldest Throwback Basketball Jersey Available
Next ‘NBA Wives Club’ Former Member Pens Inspirational Book