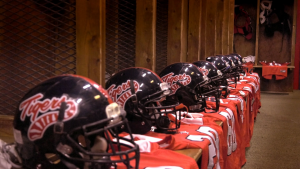 Batesville, Miss., population about 7,500 at the 2010 census, wouldn’t seem at first glance to be the ideal location for a national high school football power. But as the debut film in the “Between the Pines: Mississippi’s Greatest Sports Stories” series, “The University of South Panola (USP),” which debuted in October across the state of Mississippi, notes, a confluence of factors led to the South Panola High team winning 89 straight games en route to several state titles (now 11) and an eventual national championship in 2010.

The documentary, which fans can watch here, chronicles the several coaching changes over the past two decades, but mostly highlights the Tigers’ achievements over that time and the outstanding athletes like “Tig” Barksdale and Derek Pegues whose families have been part of the community for generations.

The film also notes that the school, with an enrollment of about 12,000 drawing from Batesville and several other towns in Panola County, has students from more affluent sections as well as struggling areas, a mix of African-American and white students. It touches briefly on how the football team has helped mitigate any racial tensions (“we’re all Tigers”), but if there are any issues in this area, there is no real mention of them.

The episode is a solid start for the series, which is produced by Bash Brothers Media and presented by C Spire, but the second installment, “The Vet,” looks even better. Airing on Nov. 17, it examines the story of Mississippi Veterans Memorial Stadium in Jackson and how the facility helped shape society and college football in the Deep South for more than six decades. The trailer hints at a deeper examination of some social issues in the state’s history and looks like a must-see.

Jerry Milani is a freelance writer and public relations executive living in Bloomfield, N.J. He has worked in P.R. for more than 30 years in college and conference sports media relations, two agencies and for the International Fight League, a team-based mixed martial arts league, and now is the PR manager for FAN EXPO, which runs pop culture and celebrity conventions across North America. Milani is also the play-by-play announcer for Caldwell University football and basketball broadcasts. He is a proud graduate of Fordham University and when not attending a Yankees, Rams or Cougars game can be reached at Jerry (at) JerryMilani (dot) com.
@gbpackjerry
Previous NBC To Broadcast The $16 Million Pegasus World Cup Invitational In January 2019
Next Maroon 5? Cardi B? Travis Scott? Who Is Odds-On Favorite For Super Bowl Halftime Act?