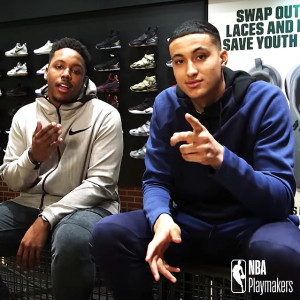 The NBA Playmakers channel is composed of original programming that mixes digital celebrities and their fanbases with NBA players and teams. Creators in the NBA Playmakers network will attend some of the league’s marquee events, including All-Star, the NBA Draft and NBA Summer League, granting them behind-the-scenes access to produce exclusive content.

“This community of creators has become part of the NBA family and has helped us connect with fans in a new way,” said Jeff Marsilio, NBA Senior Vice President, New Media Distribution. “We’re excited to launch this channel to further reach and engage our passionate fans through unique content.”

“We continue to build and grow NBA Playmakers to become the strongest digital ecosystem for the basketball community and culture,” said Ben Pickering, VP Strategic Business Development, BroadbandTV. “Producing compelling original content with professional athletes and top digital talent is an important strategic move for the NBA Playmakers brand and there is real value for all constituents, spanning digital influencers, NBA players, brands, advertisers and ultimately the viewer.”

With a variety of joint productions by the NBA and BBTV as well as influencer-produced shows, topics will include basketball culture, fitness, training, entertainment, fashion, gaming and more. The series also will be cross-promoted on the NBA’s social media outlets and YouTube channel, with a combined global community of 1.5 billion likes and followers. NBA-produced NBA Playmakers content includes an exciting lineup of shows and will feature creators, celebrities and NBA players.

Joint productions by the NBA and BBTV for Playmakers shows include:

“My YouTube channel ‘In the Lab’ is all about inspiring and motivating people through basketball. I’m excited to partner with BBTV and the NBA to create high caliber content to engage with our community and fanbase,” said InTheLab YouTube creator Devin Williams, who currently has 386K subscribers and 1.4M Monthly Views.

The BBTV and NBA relationship began in 2009, with BBTV managing fan-uploaded NBA content on YouTube. The two organizations then launched the NBA Playmakers network in 2016 to provide the creator community and NBA fans the opportunity to produce and distribute basketball culture content with exclusive access to NBA resources such as select NBA footage, tickets to games and special events, and merchandise.

Jerry Milani is a freelance writer and public relations executive living in Bloomfield, N.J. He has worked in P.R. for more than 30 years in college and conference sports media relations, two agencies and for the International Fight League, a team-based mixed martial arts league, and now is the PR manager for FAN EXPO, which runs pop culture and celebrity conventions across North America. Milani is also the play-by-play announcer for Caldwell University football and basketball broadcasts. He is a proud graduate of Fordham University and when not attending a Yankees, Rams or Cougars game can be reached at Jerry (at) JerryMilani (dot) com.
@gbpackjerry
Previous USWNT Players Association Aims to Boost Player Marketing with Athlete-Driven Partnership
Next USA Roller Sports Announces Partnership with Team App