Jerry Milani April 11, 2019 News, On The Air Comments Off on NLL Introduces Two New Broadcast Initiatives Ahead of Playoffs 1,052 Views 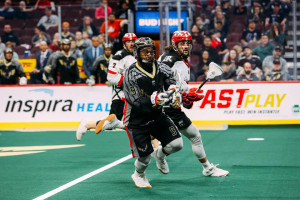 The National Lacrosse League (NLL), the largest men’s professional league has announced that it will be adding a new pregame show called NLL Playoffs Pre-Game LIVE and will be expanding NLL Wired to include the 2019 NLL Playoffs.

NLL Playoffs Pre-Game LIVE will be a 10 minute commercial-free pregame show before every playoff game. Coverage will begin 30 minutes prior to the start of the game and will be available on B/R Live to subscribers and will be simulcast to the NLL’s social channels via Facebook Live and Twitter.

“The NLL strives to be a fan-focused, innovative leader in digital broadcast production. Adding both a pre-game show and expanding our NLL Wired initiative on B/R Live for the playoffs is an example of our commitment to improving the fan viewing experience with ground-breaking technologies and in line with the league’s digital first approach,” said NLL Commissioner Nick Sakiewicz. “Our fans are some of the most passionate in all of sports and we will continue to be a sports industry league leader by providing them with incredible behind the scenes content exclusively reserved for players, coaches and officials, up until now. NLL Playoffs Pre-Game LIVE and NLL Wired will be very exciting and compelling playoff entertainment.”

NLL Playoffs Pre-Game LIVE will originate from the host team arena and will feature analysis and commentary on the game and news from around the league. This is the first time a pre-game show will be airing ahead of NLL games on B/R Live.

“The new pregame show and the expansion of NLL Wired are two examples of how far our league has come with our digital broadcast production,” said NLL VP, Broadcasting Joel Feld. “This season, we unlocked the sounds of the game in select broadcasts by ‘mic-ing’ the referee and taking viewers inside the replay booth to hear live the decision process of a replay challenge. We are pushing access even further, letting the fan hear the referees when they engage with the players and coaches during live game action.”

The NLL has also announced its national broadcast teams for the NLL Finals.
Currently in his first season as New England Black Wolves announcer, Brendan Glasheen will provide play-by-play with Toronto Rock color commentator Brian Shanahan as the analyst in his 17th year calling the NLL Finals for the games hosted by the East Division winner.

Colorado Mammoth announcer and 6-year NLL veteran Teddy Jenner will provide play-by-play along with Vancouver Warriors color commentator Brad Challoner as the analyst for the games hosted by the West Division winner.

Toronto Rock floor reporter Ashley Docking will provide insight as the sideline reporter for all games during the NLL Finals.

All NLL Playoff and Finals games will be streamed on B/R Live in the United States and Canada.

B/R Live is available by downloading the B/R Live app through iTunes or Google Play; and/or via Apple TV, the Roku platform and Amazon Fire TV.

To get the most up to date information and breaking news, like this, sign up for the NLL newsletter at nll.com.

Jerry Milani is a freelance writer and public relations executive living in Bloomfield, N.J. He has worked in P.R. for more than 30 years in college and conference sports media relations, two agencies and for the International Fight League, a team-based mixed martial arts league, and now is the PR manager for FAN EXPO, which runs pop culture and celebrity conventions across North America. Milani is also the play-by-play announcer for Caldwell University football and basketball broadcasts. He is a proud graduate of Fordham University and when not attending a Yankees, Rams or Cougars game can be reached at Jerry (at) JerryMilani (dot) com.
@gbpackjerry
Previous Olympians Burroughs, Askren To Battle In NYC On FloSports
Next Las Vegas Big Time Tournament Announces Streaming Platform