Jerry Milani May 29, 2019 News, On The Air Comments Off on Cricket Wireless Announces Exclusive Wireless Sponsorship Of Combate Americas 1,042 Views 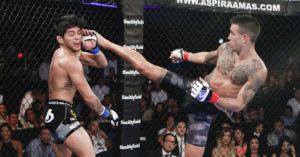 As further evidence of the soaring popularity of Mixed Martial Arts (MMA), Combate Americas today announced that Cricket Wireless is the exclusive wireless sponsor of one of the fastest-growing franchises in all of sports. The deal provides Cricket with unprecedented visibility and consumer engagement at Combate’s five biggest events throughout 2019.

“This new sponsorship makes sense for us,” said Vice President and Chief Marketing Officer of Cricket Wireless Tiffany Baehman. “Combate Americas allows us to engage our Hispanic customers who are passionate about this sport.”

The first Cricket-sponsored event “Cricket Wireless Presents Combate Americas: Reinas” made history as the first all-women MMA fight card. The event received record ratings in the live telecast on Univision and was the second highest rated since Combate Americas began airing its live shows on broadcast television in April 2018.

“We are thrilled and energized to partner with a blue-chip sponsor like Cricket Wireless, who continues to provide an extremely valuable service to the millions watching Combate Americas at a price-point in market that can’t be matched,” said Chief Revenue Officer of Combate Americas Michael Pine. “Just like Combate, Cricket is passionate about engaging with the fastest growing consumer demographic in the world; reaching Hispanic audiences in a genuine way at our action-packed events. On the heels of this sponsorship’s success, we look forward to expanding and adding official and exclusive sponsors from other premium categories.”

In addition to its presenting sponsorship at “Reinas” and upcoming events, Cricket and Combate have developed a 17-piece video series “Bridges” and “Prep Mode” that gives fans a closer look into fighters everyday lives. “Bridges” documents the journey of Hispanic fighters who call themselves “200 percenters” as they share a deeply rooted pride for two countries that they call home and “Prep-Mode” gives a behind-the-scenes look into the hardcore training of Combate’s strongest fighters. The videos will air in Combate live broadcasts and also be distributed on social and digital platforms.

Cricket will also bring fans closer to fighters by giving them exclusive access to a preliminary fight broadcast in Spanish and a post-fight show on social media featuring event highlights, as well as a sweepstakes in which one lucky winner will receive an all-expenses paid trip with a guest to one of Combate Americas’ events courtesy of Cricket Wireless.

Jerry Milani is a freelance writer and public relations executive living in Bloomfield, N.J. He has worked in P.R. for more than 30 years in college and conference sports media relations, two agencies and for the International Fight League, a team-based mixed martial arts league, and now is the PR manager for FAN EXPO, which runs pop culture and celebrity conventions across North America. Milani is also the play-by-play announcer for Caldwell University football and basketball broadcasts. He is a proud graduate of Fordham University and when not attending a Yankees, Rams or Cougars game can be reached at Jerry (at) JerryMilani (dot) com.
@gbpackjerry
Previous Champs Sports Taps Notable Influencers to Launch Two New Digital Series
Next World Armwrestling League (WAL) Aligns With Strategic Broadcast Partners