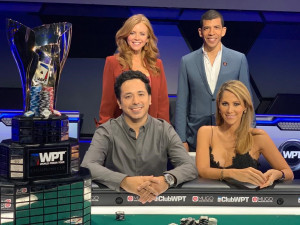 The World Poker Tour last week announced a significant push into the Latin American market with word that its Season IX programming will be seen on TV Azteca’s Channel 7 at 11 p.m., beginning next Friday, July 12.

With TV Azteca recently becoming a shareholder of Allied Esports, the WPT will gain entry into that important space. One result is the social poker gaming site WPTGO, developed by TV Azteca and WTP targeting the Latin American online and mobile gaming audience.

The WPT television show’s premiere date on TV Azteca, and the launch of WPTGO, ties to the strategic pillars first established when the strategic agreement was signed in March 2019. WPT and TV Azteca are committed to continuing the growth of the WPT’s globally renowned poker content through localizing it for the Latin American market, and monetizing the WPT brand-name across Latin America through WPTGO and WPT-branded merchandise in retail stores throughout the region. In addition, WPT and TV Azteca remain aligned in their efforts to bring live WPT events to Latin America. Timing for events as part of the world-class WPT LATAM Tour will be announced at a later date.

“The deal between the World Poker Tour and TV Azteca reaches an incredible level of activation with the commencement of the WPT television show and launch of WPTGO across Latin America,” Adam Pliska, CEO of the World Poker Tour, said in a statement. “The continued growth of the alliance between WPT and TV Azteca allows us to further expand our content and social poker gaming assets to this burgeoning Latin American audience and grow the game of poker in ways never previously imagined. It is my pleasure to formally welcome Inés Sainz, Santiago González Álvarez, and Angel Guillén to the WPT Family and watch them reach viewers across Latin America.”

Jerry Milani is a freelance writer and public relations executive living in Bloomfield, N.J. He has worked in P.R. for more than 30 years in college and conference sports media relations, two agencies and for the International Fight League, a team-based mixed martial arts league, and now is the PR manager for FAN EXPO, which runs pop culture and celebrity conventions across North America. Milani is also the play-by-play announcer for Caldwell University football and basketball broadcasts. He is a proud graduate of Fordham University and when not attending a Yankees, Rams or Cougars game can be reached at Jerry (at) JerryMilani (dot) com.
@gbpackjerry
Previous Docuseries ‘4th And Forever’ To Premiere On CuriosityStream July 11
Next VSiN Partners with MSG Networks to Bring Sports Betting and Entertainment Content to New York Area