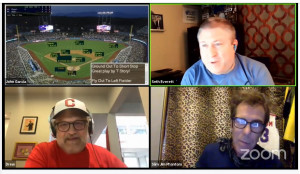 Milwaukee’s Christian Yelich‘s two-run home run in the fourth inning was one of five circuit clouts in the game as the National League topped the American, 7-2, in Strat-O-Matic’s simulation of the All-Star Game Tuesday night. TV host Drew Carey (American) and musician Slim Jim Phantom (National) managed the teams during a live video stream on Wizard World Virtual Experiences.

Yelich’s shot gave the N.L. a 2-0 lead. One out later, Matt Carpenter of St. Louis followed with another blast for a 3-0 edge for Phantom’s squad.

Carey’s Junior Circuit team pulled to within 3-2 in the sixth, but three runs in the bottom of the frame put the game out of reach.

“I’ve been playing this game since the ’70s,” added Carey, a member of several Strat-O-Matic leagues, including one with Phantom. “I used to play my brother all the time, some of my fondest memories of growing up and always loved the game.”

Max Scherzer of Washington earned the win with a scoreless inning. Gerrit Cole of the Yankees gave up the three fourth-inning runs and took the loss.

Strat-O-Matic will continue its simulation of the regular season until the teams return to action on the field. Fans can follow the action, updated daily at 2 p.m. ET, at https://www.strat-o-matic.com/2020-season-simulation/.

Jerry Milani is a freelance writer and public relations executive living in Bloomfield, N.J. He has worked in P.R. for more than 30 years in college and conference sports media relations, two agencies and for the International Fight League, a team-based mixed martial arts league, and now is the PR manager for FAN EXPO, which runs pop culture and celebrity conventions across North America. Milani is also the play-by-play announcer for Caldwell University football and basketball broadcasts. He is a proud graduate of Fordham University and when not attending a Yankees, Rams or Cougars game can be reached at Jerry (at) JerryMilani (dot) com.
@gbpackjerry
Previous Peacock Premium To Feature 175+ Exclusive Premier League Matches In 2020-21
Next Love Soccer? Here’s The First Soccer Podcast Network In U.S.