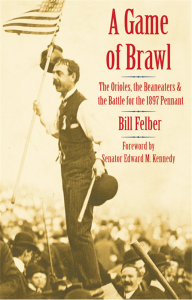 For many who enjoy baseball history, the agreement between the newly-formed American League and National League to begin play in the World Series in 1903 signaled the beginning of the “modern” baseball era. Indeed, Jack Chesbro‘s 41 wins for the New York Highlanders still counts as the standard for single-season victories.

In many ways, that makes sense. Most rules, though still a bit fluid, were consistent by then, and very similar to today’s.

With pennant races curtailed with each realignment since 1969, first from two single leagues to four divisions, to six and wild cards, it may be difficult to imagine a time when the pennant race was the only thing; when the single league considered to be Major, the National League, decided its champion by winning percentage during the season alone.

Bill Felber looks at what can be considered baseball’s first great chase for the flag in A Game of Brawl: The Orioles, the Beaneaters & The Battle for the 1897 Pennant. Felber captures what was a much rougher game, with players resorting to any tactics necessary to win, from grabbing runners as they tried to advance, to cutting third base entirely on the way home from second. There was plenty that went on outside the view of the single umpire used for nearly every game, and the Orioles teams certainly knew every angle.

In 1897, baseball was the undisputed king of sports. A big prize fight could gain a good deal of attention, but the diamond was the choice for the most rabid fans.

These were the two top franchises in the league – indeed, one or the other team had won the league title every year since 1891 – and with Boston’s Royal Rooters providing the background noise throughout, the chase came down to a late-season (thought not season-ending) showdown series in Baltimore.

Would it be a four-peat for the Orioles, who boasted Hall of Famers like the pugnacious John McGraw and Willie Keeler, of “hit ’em where they ain’t” fame? Or would the Beaneaters, considered a much more desirable winner for most fans, claim the crown?

With most books recapping seasons, almost every reader already knows the outcome. In this case, there may be the added suspense that this race may be new to all but the most ardent fans.

More than just a recap of the season, A Game of Brawl looks at the teams’ spring training travails, as well as many of the day-to-day challenges that modern players and fans take for granted. Boston, for example, chose a steamship to travel south rather than the railroad, which Felber notes was still inconsistent just over three decades after the Civil War. And the housing conditions were as Spartan as could be; baseball was not yet a profession worthy of the best lodgings, the proprietors preferring to hide the ballplayers as far from “decent folk” as possible.

Felber uses details like these well to paint a picture of a sport played quite differently from today. Imagine a player being showered with coins as he heads to the plate, in admiration of his efforts. Or umpires selected from among the competing teams when the league arbiter didn’t show.

Jerry Milani is a freelance writer and public relations executive living in Bloomfield, N.J. He has worked in P.R. for more than 30 years in college and conference sports media relations, two agencies and for the International Fight League, a team-based mixed martial arts league, and now is the PR manager for FAN EXPO, which runs pop culture and celebrity conventions across North America. Milani is also the play-by-play announcer for Caldwell University football and basketball broadcasts. He is a proud graduate of Fordham University and when not attending a Yankees, Rams or Cougars game can be reached at Jerry (at) JerryMilani (dot) com.
@gbpackjerry
Next Fantasy Options Continue To Grow With DFS 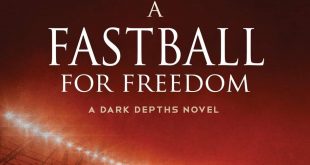 ‘A Fastball For Freedom’ Imagines Turn Of The 22nd Century World, Baseball

If fans think baseball has changed a lot since they were kids, just wait until ...