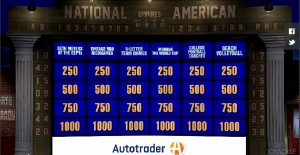 The winner will take home the grand prize of $50,000; the second-place finisher wins $25,000 and third place claims $10,000. The three contestants set to compete earned the highest point totals during regular season play. They are:

All three contestants will play in both the September 9 and September 16 episodes; the player with the highest cumulative score at the end of the second game wins and is named the first-ever Sports Jeopardy! Season Champion.

Sports Jeopardy! allows for a unique level of interactivity as viewers can download the free mobile game, available on  iOS, Google Play, and Amazon, which interacts with the show as a second screen application.

The second season of Sports Jeopardy! will begin streaming all-new episodes on September 23. New episodes will debut every Wednesday at 9 am EST, and will also be available on demand year round with a total of 52 episodes each year.

Jerry Milani is a freelance writer and public relations executive living in Bloomfield, N.J. He has worked in P.R. for more than 30 years in college and conference sports media relations, two agencies and for the International Fight League, a team-based mixed martial arts league, and now is the PR manager for FAN EXPO, which runs pop culture and celebrity conventions across North America. Milani is also the play-by-play announcer for Caldwell University football and basketball broadcasts. He is a proud graduate of Fordham University and when not attending a Yankees, Rams or Cougars game can be reached at Jerry (at) JerryMilani (dot) com.
@gbpackjerry
Previous EPIX Takes Another Step In Sports
Next Watch The ‘Sports Jeopardy!’ Season 1 Championship Final Game Available Today On Crackle