Jerry Milani October 15, 2015 News, On The Air Comments Off on EPIX And NHL Reunite For A Second Season Of ‘EPIX PResents Road To The NHL Winter Classic’ 2,326 Views 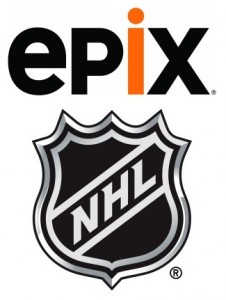 Premium TV network EPIX and the National Hockey League (NHL) today announced that EPIX Presents Road To the NHL Winter Classic™ will be returning to the channel and will make its U.S. television premiere Wednesday, Dec. 16 at 10pm ET/PT, 9C.  The weekly series, consisting of four one-hour episodes, will focus on the heated rivalry between the Boston Bruins and the Montreal Canadiens as they prepare for the 2016 Bridgestone NHL Winter Classic® at Gillette Stadium in Foxborough, Mass. on New Year’s Day 2016. This will be the second year that EPIX and the NHL® team up for this all-access look inside the lives of these elite professional athletes, their families and their fans. In addition, U.S. hockey fans will be able to stream each episode of EPIX Presents Road To the NHL Winter Classic live as it premieres on EPIX via EPIX.com and NHL.com.

Produced by 53-time Emmy® award winner Ross Greenburg, narrated by Bill Camp (Black Mass, 12 Years a Slave) and presented in partnership with NHL Original Productions, EPIX Presents Road To the NHL Winter Classic provides viewers with exclusive access to the players and coaches – in their professional and personal settings, capturing all the action, camaraderie, drama, humor, heartaches and triumphs as they unfold. The Bruins will be making their second appearance in the Bridgestone NHL Winter Classic® while this is the first NHL Winter Classic appearance for the Canadiens. These two Original Six™ teams have faced off 730 times during the regular season, tied for the most head-to-head meetings by any two teams in NHL history (Chicago-Detroit). Their 177 head-to-head playoff games and 34 postseason series are also the most in League history, while their nine head-to-head Game 7s lead all teams in North American major professional sports.

“EPIX was committed to revitalizing the ‘Road to The NHL Winter Classic’ series and restoring its original mission — which is to offer viewers unfiltered, intimate access inside the world of the NHL,” said Mark S. Greenberg, EPIX President and CEO. “The overwhelmingly positive response we received from our audience and the hockey fans who watched the first season is proof that we delivered. We are excited to work with Ross Greenburg on another season that showcases the high quality premium entertainment our subscribers have come to expect from EPIX.”

“The series on EPIX has become an essential part of the Bridgestone NHL Winter Classic experience for our fans and players,” said NHL Chief Operating Officer John Collins.  “The Bruins-Canadiens rivalry is tailor-made for the series and Ross Greenburg’s skill as a storyteller.  The show will undoubtedly uncover intriguing and captivating stories on and off the ice that will surprise even our most avid fans.”

“I am excited to be working with EPIX and the NHL on another season of ‘EPIX Presents Road To The NHL Winter Classic,’ said Ross Greenburg. “Utilizing strategically placed cameras and microphones and a ‘you-are-there’ format, each episode will present a unique and unedited look into the players’ homes, locker rooms, training rooms and of course, the rink.”

Jerry Milani is a freelance writer and public relations executive living in Bloomfield, N.J. He has worked in P.R. for more than 30 years in college and conference sports media relations, two agencies and for the International Fight League, a team-based mixed martial arts league, and now is the PR manager for FAN EXPO, which runs pop culture and celebrity conventions across North America. Milani is also the play-by-play announcer for Caldwell University football and basketball broadcasts. He is a proud graduate of Fordham University and when not attending a Yankees, Rams or Cougars game can be reached at Jerry (at) JerryMilani (dot) com.
@gbpackjerry
Previous Pacquaio Packs Politics, Boxing, Into His Business
Next You May Know the Story of the Brooklyn Dodgers, But You Don’t Know the Whole Story… Until Now