Home / News / You May Know the Story of the Brooklyn Dodgers, But You Don’t Know the Whole Story… Until Now

You May Know the Story of the Brooklyn Dodgers, But You Don’t Know the Whole Story… Until Now

Jerry Milani October 15, 2015 News Comments Off on You May Know the Story of the Brooklyn Dodgers, But You Don’t Know the Whole Story… Until Now 2,657 Views 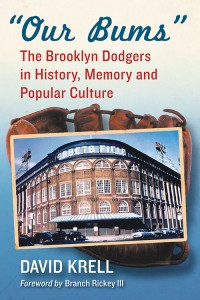 Coinciding with the 60th anniversary of the Brooklyn Dodgers’ only World Series title, author David Krell’s Our Bums: The Brooklyn Dodgers in History, Memory and Popular Culture (October 1, 2015; $29.95) brings to life the lesser-known stories of the team’s 125-year history.

With the Foreword written by Branch Rickey III, grandson of the legendary Dodgers executive, “Our Bums” dispels myths, reveals truths, and explains legends comprising Dodgers lore, including the reasons that triggered the team’s departure to Los Angeles.

Krell says: “There is something magical about a team that can reduce a 75-year-old man to tears in an interview. One fan told me, ‘Talking to you makes me feel like I’m 10 years old again.’”

“Our Bums” is bookended by an emotionally charged Prologue and Epilogue that will even make Yankees fans reach for tissues. “I begin with a story about my dad going to the World Series in 1953 and seeing Mickey Mantle hit a grand slam against the Dodgers. The Epilogue brings it full circle with us going to see a game in the 1978 World Series, when the L.A. Dodgers played the Yankees,” explains Krell.

For baseball fans, “Our Bums” adds value by filling in gaps of Dodgers scholarship, including the team’s origins, Charles Ebbets’s sacrifice to build a new ballpark that eventually became a baseball icon, and the reporting in the black press about Jackie Robinson. Krell also examines the Dodgers’ unsung contribution to baseball popular culture, including numerous novels, plays, films, art, and songs dating back to the 1930s. Additionally, “Our Bums” has a chapter dedicated to oral history compiled through dozens of interviews, including Duke Snider’s daughter and Dodgers legend Carl Erskine. “Fans still bleed Dodger Blue,” says Krell.

The Dodgers left for Los Angeles after the 1957 season.  You can take the Dodgers out of Brooklyn. But “Our Bums” proves that you’ll never take Brooklyn out of the Dodgers.

Jerry Milani is a freelance writer and public relations executive living in Bloomfield, N.J. He has worked in P.R. for more than 30 years in college and conference sports media relations, two agencies and for the International Fight League, a team-based mixed martial arts league, and now is the PR manager for FAN EXPO, which runs pop culture and celebrity conventions across North America. Milani is also the play-by-play announcer for Caldwell University football and basketball broadcasts. He is a proud graduate of Fordham University and when not attending a Yankees, Rams or Cougars game can be reached at Jerry (at) JerryMilani (dot) com.
@gbpackjerry
Previous EPIX And NHL Reunite For A Second Season Of ‘EPIX PResents Road To The NHL Winter Classic’
Next Topps Takes Another Step In Brand Expansion