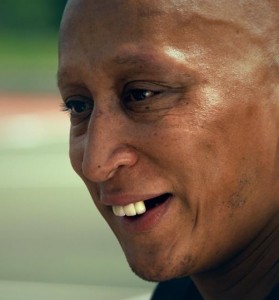 The streets of New York have spawned a long list of playground legends, from Nate “Tiny” Archibald and Connie Hawkins to Earl “The Goat” Manigault and “Pee Wee” Kirkland. However few have had the rise, the fall and the rise again that Lloyd “Swee Pea” Daniels had in the 1980’s and ‘90’s.

First time director Benjamin May now recounts that star-crossed story with The Legend of Swee Pea, which will make its world premiere at DOC NYC on Tuesday November 17 at the IFC Film Center in New York with a sold out screening, and November 19 at 7:30 pm at the Bow Tie Cinema at 260 W 23rd St, between 7th and 8th Avenues.

“There is perhaps no sport that creates legends like basketball does, and there was perhaps no bigger basketball legend in the 1980’s and ‘90’s than that of Lloyd Daniels,” May, a Minnesota Neuroradiologist turned film director said. “As a fan of the game I was enthralled with Lloyd’s amazing story of tragedy, triumph and perseverance and we are proud to tell his cautionary tale to an audience who may be aware, but more importantly a legion of basketball fans of a younger generation who may not know the story. It is one for the ages, and frankly one that is probably not yet done.”

Nicknamed for the son of the legendary cartoon character Popeye, Lloyd Daniels was one of the top college basketball recruits of the late 1980s, playing at five high schools and Mt. San Antonio Junior College before the University of Nevada Las Vegas won a massive recruiting battle to have him join the Runnin Rebels and legendary coach Jerry Tarkanian. Before he was able to play a single game at UNLV, he was arrested for cocaine possession, ending his time at UNLV before it began. Later shot three times in the chest at age 21 over an argument about an $8 dollar bag of cocaine, the man christened as the best high school player to come out of New York since Kareem Abdul Jabbar as well as the heir apparent to Magic Johnson was thought by many to have had a career end before it started, when in reality his story was just beginning.

Daniels managed to overcome all of those obstacles, and with remnants of bullets still in his body, and with years of crack addiction behind him eventually made it to the NBA, playing through the Continental Basketball Association and the USBL before embarking on a seven year NBA run and an overall professional career that took him from Italy and Turkey to New Zealand and China during a mythical 20 year run.

This film documents Daniels’ struggle to survive the perilous streets of New York, to navigate in the world of high stakes professional sports, and to overcome a lifetime of addiction. In addition to interviews with Tarkanian, David Robinson, John Lucas, and Avery Johnson, as well as Five Star Basketball founder Howard Garfinkel, legendary basketball talent evaluator Tom Konchalski, longtime  New York high school coach Ron Naclario and Newsday’s John Valenti, the project uses archival footage, current verité, and illustrations to recreate that mythic talent that the young Swee’ Pea displayed in the playgrounds, to express not only his charisma and charm, but also the darker side the unrepentant lone wolf and hustler who, in the words of a friend, is “a rogue…he walks the face of this earth endlessly.”

The original documentary is expected to have a wide release in mid 2016 following the two screenings and additional ones still to be announced.

Jerry Milani is a freelance writer and public relations executive living in Bloomfield, N.J. He has worked in P.R. for more than 30 years in college and conference sports media relations, two agencies and for the International Fight League, a team-based mixed martial arts league, and now is the PR manager for FAN EXPO, which runs pop culture and celebrity conventions across North America. Milani is also the play-by-play announcer for Caldwell University football and basketball broadcasts. He is a proud graduate of Fordham University and when not attending a Yankees, Rams or Cougars game can be reached at Jerry (at) JerryMilani (dot) com.
@gbpackjerry
Previous For The Record-Harlem Globetrotters Set Seven Guinness World Records® Records
Next Berra Museum Opens ‘Athletes To Broadcasters’ Exhibit