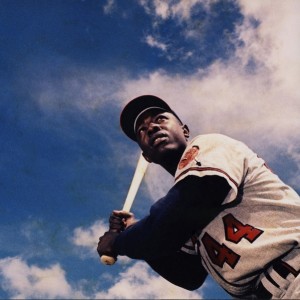 This will be worth locating Smithsonian Channel on your pay TV lineup, if somehow you haven’t already…

“The Hammer of Hank Aaron” is the first in Smithsonian’s “Major League Legends” series, debuting this week. The documentary focuses on Aaron’s sometimes overlooked role in the early post-integration days of Major League Baseball. Aaron is the only living legend to be featured in the series, which continues on consecutive Mondays this month with profiles of giants Babe Ruth, Lou Gehrig and Ted Williams.

The inclusion of interviews with Aaron and his wife Billye add a critical dimension to the film, which notes the obstacles he faced, first in even being seen enough to get a chance — it was the Indianapolis Clowns of the moribund Negro Leagues that first “discovered” him in Mobile, Alabana — then in fending off purely racially motivated opposition to his run at Babe Ruth’s all-time home run record.

“It’s a story that has been less told because it is in some ways harder to tell,” said Josh Oshinsky, executive producer of the film, at a screening at Kean (N.J.) University on Monday night which included members of the school’s baseball and softball teams as well as Smithsonian officials and N.J. State Assemblyman Jamel Holley, a Kean graduate and the first African-American to hold the office in that district.

“What he had to go through was more private and not as apparent but just as significant,” added Oshinsky.

The film also stresses that what should have been the happiest time in Aaron’s life was made to be close to the worst. Though he was celebrated by millions, the constant flood of threatening letters he received — some of which he keeps to this day — shades that experience. That he overcame it — “Thank God, it’s over” was his first stated emotion upon drilling No. 715 on April 8, 1974 (coming off a year, in fact, when he hit 40 home runs with an insane 1.045 OPS, second best of his entire career) — is even more incredible.

If the leadoff hitter in this series is any indication, you’ll want to make time for the others as well.

Jerry Milani is a freelance writer and public relations executive living in Bloomfield, N.J. He has worked in P.R. for more than 30 years in college and conference sports media relations, two agencies and for the International Fight League, a team-based mixed martial arts league, and now is the PR manager for FAN EXPO, which runs pop culture and celebrity conventions across North America. Milani is also the play-by-play announcer for Caldwell University football and basketball broadcasts. He is a proud graduate of Fordham University and when not attending a Yankees, Rams or Cougars game can be reached at Jerry (at) JerryMilani (dot) com.
@gbpackjerry
Previous Live Spring Training baseball for 34 straight days begins Tuesday
Next Another Monumental Sports Business Surprise