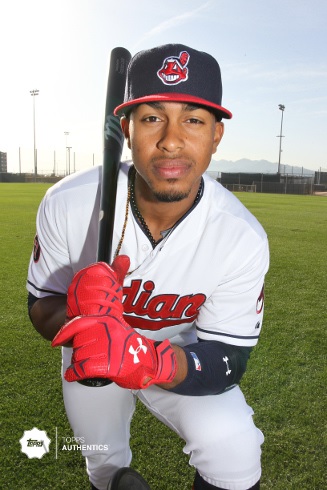 One of the top shortstops in Major League Baseball is joining the Topps Authentics℠ roster in an exclusive multi-year deal.

I’m excited to sign with Topps,” said the 22-year-old Lindor. “They have been with me since the beginning of my career and I’m pumped to take this next step with them.”

Lindor is one of the top players in MLB. He finished second in the American League Rookie of the Year voting in 2015 after an impressive season. In 99 games, he hit .313 with 12 home runs and 51 RBI.

The Cleveland Indians 2011 first-round pick is one of the youngest players in the league, and also one the most popular future stars.

“Francisco is a great, young talent who fits perfectly within our Topps Authentics lineup,” said David Leiner, Topps Vice President and General Manager of North American Sports & Entertainment. “We are proud to be working with him on Topps Authentics to bring baseball fans closer to the game.”

Jerry Milani is a freelance writer and public relations executive living in Bloomfield, N.J. He has worked in P.R. for more than 30 years in college and conference sports media relations, two agencies and for the International Fight League, a team-based mixed martial arts league, and now is the PR manager for FAN EXPO, which runs pop culture and celebrity conventions across North America. Milani is also the play-by-play announcer for Caldwell University football and basketball broadcasts. He is a proud graduate of Fordham University and when not attending a Yankees, Rams or Cougars game can be reached at Jerry (at) JerryMilani (dot) com.
@gbpackjerry
Previous Another Monumental Sports Business Surprise
Next Wilson Sporting Goods Co. And The Assocation Of Volleyball Professionals Extend Partnership To 2020