New Three on Three Event Launches In U.S., With Sights on Olympic Glory 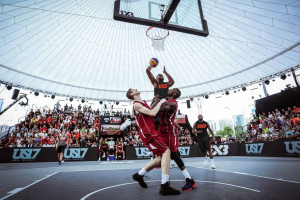 If it works for Ice Cube, can it work for the Olympics?

That’s the question that American hoops fans may want to ask, as a San Francisco based organization, 3BALL USA, announced today a plan to roll out a series of events based on FIBA rules to grow and develop the sport of three on three basketball in the future. 3×3 is now an Olympic sport, a version of it is played by older ex NBA stars in the successful 3BALL which was launched last year, and there was a test of a similar college model at the Final Four, but this is the first consistent test of the format in the U.S. with a professional league that could lead to the development of the game in the U.S. The sport is already wildly popular with events around the world.

This 2018 test event will be held  August 17 to 19 at SIMON’s Great Mall located in Milpitas, California (Silicon Valley). What is this exactly? The FIBA-endorsed tournament will adhere to the official FIBA 3×3 game rules that will be used during the 2020 Olympics. The eight teams featured in the competition will be seeded based on pool play results and face off in a single elimination playoff round on Sunday.  The 3BALL champions will win a $50,000 cash prize, and the top-finishing American team will earn automatic qualifications for the 2018 Sina Sports 3×3 Elite League in Beijing, China and the 2019 USA Basketball 3×3 National Championships at the U.S. Olympic Training Center in Colorado Springs, Colorado.  An elite field of teams from around the world will be announced over the next week to ten days.

The entire event will be live streamed on Twitch, the leading digital platform in the U.S. for live video, and Sina Sports, the #1 digital sports platform in China. Additionally, NBC Sports Bay Area, NBC Sports Chicago, and NBC Sports Washington, will broadcast the 3BALL USA Championship Game, which will close the event on Sunday.

3BALL USA, which has had at least one team in the USA Basketball 3×3 National Championships each of the past three years, was established in 2016 when founder and chief executive officer Michael Wranovics discovered FIBA 3×3 and recognized a growing opportunity for aspiring post-collegiate basketball players and a new pathway to the Olympics.

“The global popularity of basketball has never been stronger, and FIBA’s innovative 3×3 game is helping to engage new players and younger fans around the world,” said Wranovics in a statement. “Capitalizing on the growing excitement around this faster-paced version of the sport, our goal with 3BALL USA is to introduce a professional model that offers a new generation of U.S. athletes the opportunity to compete for a gold medal in Tokyo and beyond.”

The field is expected to be made up of international players and three on three specialists, not big name former NBA players, and the plan is to launch a formal U.S. circuit some time in 2019.

All of the details can be found at www.3ballusa.com

Ballers, lace up your kicks!

Jerry Milani is a freelance writer and public relations executive living in Bloomfield, N.J. He has worked in P.R. for more than 30 years in college and conference sports media relations, two agencies and for the International Fight League, a team-based mixed martial arts league, and now is the PR manager for FAN EXPO, which runs pop culture and celebrity conventions across North America. Milani is also the play-by-play announcer for Caldwell University football and basketball broadcasts. He is a proud graduate of Fordham University and when not attending a Yankees, Rams or Cougars game can be reached at Jerry (at) JerryMilani (dot) com.
@gbpackjerry
Previous ESPN Travels to Green Bay for Two Days of Training Camp Shows as the Packers Kick Off Their 100th Season
Next Funds advised by Apax Partners to acquire Genius Sports Group