From ‘Non-Entities’ to Champions, Patriots’ Near Six Decades Chronicled In New Book 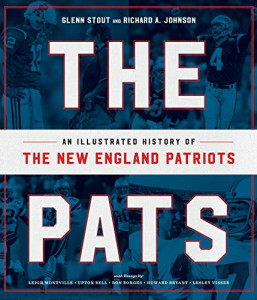 In 2020, the New England Patriots will celebrate the 60th anniversary of their birth as the Boston Patriots in the old AFL. Aside from a Championship Game loss in 1963, the AFL years were mostly lean for a team that often played second fiddle in its own market to – gasp! – the New York Giants, whose NFL tentacles reached into the region on Sundays in many of those years. The post-merger years brought only sporadic success, and for many area fans the Patriots were fourth behind the Red Sox, Celtics and Bruins.

Hard to fathom for, say, a 25-year-old who began his or her fandom at around age 8, in 2001. That fan knows only one head coach in Bill Belichick (not the five in the 11 years prior to his arrival in 2000) and one QB1, Tom Brady. He has known only winning seasons – 10 or more wins every year but 2002. She has celebrated five Super Bowl titles. This team an afterthought?

Stout and Johnson take fans all the way back to the beginning, when PR-man-turned-owner Billy Sullivan, who once said, “I hate being called a ‘non-entity,’” became the franchise’s de facto “Father,” without whom the authors argue that football in New England would have been stalled another eight ot 10 years. Sullivan’s is a mixed legacy: “part dreamer, part schemer,” the authors note. With reporter’s detail, The Pats looks at that founding, the ensuing AFC years, the move to Foxborough in 1971, the tumultuous Bill Parcells years which led to the team’s first Super Bowl appearance, all the way through the unprecedented success that the tandem of Belichick and Brady afforded. 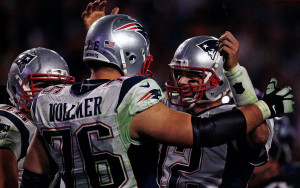 The story is compelling enough; but the photography really makes The Pats stand out. Even longtime, loyal, “Patriot Pat” logo-era fans will find dozens of the images new to them. (Don King AND Michael Jackson, anyone?) And essays sprayed throughout by the likes of Leigh Montville, Leslie Visser, Ron Borges and others deliver well-placed breaks that heighten the narrative.

The ups – the five Super Bowls, The Tuck Rule game – and the downs – the losses to the Giants, SpyGate, Deflategate – are all in here. Of particular interest is a look at the late-70s era teams, which included two 11-win squads with high hopes that, in the context of Boston sports at the time, left fans as empty as the Sox and Bruins.

While the second half of the Patriots history has meant significantly more winning than the first, there are plenty of stories of owners, staff, coaches and players, some great, some inept, to keep Pats fans reading, and even curious football fans who may not have a rooting interest for or against the team (are there any fans like that?) will likely enjoy having this one on their coffee tables.

Jerry Milani is a freelance writer and public relations executive living in Bloomfield, N.J. He has worked in P.R. for more than 30 years in college and conference sports media relations, two agencies and for the International Fight League, a team-based mixed martial arts league, and now is the PR manager for FAN EXPO, which runs pop culture and celebrity conventions across North America. Milani is also the play-by-play announcer for Caldwell University football and basketball broadcasts. He is a proud graduate of Fordham University and when not attending a Yankees, Rams or Cougars game can be reached at Jerry (at) JerryMilani (dot) com.
@gbpackjerry
Previous Jackie Robinson Foundation Announces Centennial Celebration in 2019
Next NBC To Broadcast The $16 Million Pegasus World Cup Invitational In January 2019