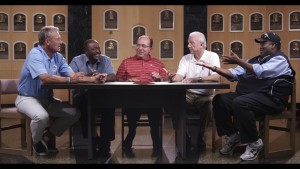 “What is a film about the fastball?”

That’s the question that Jonathan Hock, director of the best sports documentaries you have seen or should see (The Lost Son of Havana, Off the Rez, “30 for 30” shorts “The Best there Never Was,” “Of Miracles and Men,” to name just four) posed after fielding a call from noted producer Thomas Tull, who had an idea for a film.

“Usually in the films we make about sports, there is a narrative, a game you’re building up to, or something where you are taking a character on a journey,” Hock told a sellout crowd at Tuesday’s screening of what that idea would become, the feature-length documentary Fastball at the Yogi Berra Museum & Learning Center in Montclair, N.J. “That’s sort of the formula for filmmaking. This was about a concept. I was flummoxed, frankly.”

Hock and his team shot hours of interviews with Hall of Famers including Bob Gibson, Hank Aaron, Rich Gossage and Nolan Ryan and soon-to-be-enshrinee Derek Jeter among many others. To tell the story of the fastball, the film uses the hook of the captivating the pitch has held on fans, dating it back to the immortal Walter Johnson. With the question of who threw the fastest pitch ever a thread, sections featured Johnson, Bob Feller, Nolan Ryan, Sandy Koufax, Aroldis Chapman, Craig Kimbrel and the enigmatic Steve Dalkowski. (Side note: there’s an effective use of a Dalkowski rookie card that neatly gets across the point of his place in baseball history, to men of a certain age at least.)

Fastball works because it is ultimately about people, not math (there is some brain science, but it’s not too overwhelming). Baseball fans will revel in the game footage as well as the archival images of early attempts to track pitch speed, dating all the way back to primitive contraptions clocking Johnson’s heater a century ago.

The film opens in select theaters nationwide on Friday, and will also be available on VOD, iTunes and other formats beginning that day.

Hock discussed a few other elements of the film in his post-screening discussion with fans on Tuesday.

On whether there were other pitchers he would have included in the film given more time:
“There were some that were definitely left out of the story… Don Drysdale, Ryne Duren, who we couldn’t really find footage of, Bullet Bob Turley, Sam McDowell, Jim Maloney, but there wasn’t really data, so at some point you’re just listing guys. Randy Johnson … just really didn’t want to be interviewed.”

On a Nolan Ryan story that didn’t make the film
“In 1986…the playoffs against the Mets, [the Astros] had kind of been nursing him through the year, he was 39, sort of had a sore arm, he pitched that amazing game against [Dwight] Gooden, when he stayed in the game, I think, through nine and Gooden pitched into the 10th and the Mets beat them in 10. Nolan Ryan went home and went to see [Dr.] James Andrews. He did his examination and said, ‘Nolan, bad news, it’s torn. I’m not sure if it’s completely torn, I’d have to pull it back further, so you’re going to need surgery.’ And at that point it’s like a year and a half before you can start throwing again after Tommy John surgery, so Nolan said, ‘I’m 39 years old, I’m going to be 41 by the time I can throw, I’m just going to see what happens.’ He said normally he would start throwing on December 15, and this off season he waited until January 15. He picked up a ball, started throwing it, felt OK. [It was] seven more seasons before it finally went.”

On the psyche of pitchers of how they felt after hitting a batter
“What they said to me was that you get into a different head and you are not thinking about it as a person. Not hitting someone on purpose. If it hits him, you sort of just wait for another ball, and go back in. Later, they allow themselves to think about what might have happened. But Dalkowski, what they said about him was that his first year in the minor leagues he actually tore a kid’s ear off. At that point he never pitched inside, they tried to correct his wildness by having him practice with two batters. But that wasn’t his problem; he was never going to hit a guy, but he couldn’t get it straight [high/low]. Walter Johnson, they say if he had the personality to pitch inside that he would have set every record. There is anecdotal stuff about that, that he hit somebody as a young man also and he never wanted to hit somebody again.”

On the sad story of Dalkowski
On the Blu-Ray there is an extended Dalkowski interview section that gets into what happened with him. He started drinking… He had been drinking while he was playing and he was apparently a wild man in more than one way, and when he got hurt and was released he suffered a terrible ordeal with alcoholism. He was in Stockton, Calif., and became a migrant farm worker picking fruit in Central Valley, California. Then he disappeared…and surfaced… His sister brought him back to New Britain, Connecticut, he was diagnosed with what they call alcohol-induced dementia… He’s had a lot of therapy… We had originally had him near the end of the film… But it was just too sad.

On the process/writing to highlight the excitement of the fastball
The very first thing we shot was Dalkowski; we found him and figured we had better hurry. Then we went up to the Hall of Fame on Induction weekend. We had the idea to get a handful of the good talkers [George Brett, Joe Morgan, Tony Gwynn, Al Kaline, Johnny Bench] in the Hall of Fame plaque gallery, to tea about the fastball. They were there less than two hours. That just happened, we just were getting them set and they just went over and starting talking about the guys. It was a little bit of spontaneous filmmaking. It really did take a long time to figure out how to put it together. Breaking it up into bits we could handle. We edited this for a long time.

On how he worked math and physics into determining the fastest pitch ever
We went to these physics professors and told them what we wanted to do and they spend a month thinking about it. The idea of the ball disappearing was fascinating. All these Hall of Famers said the ball would disappear, so I mentioned that to these professors of brain and cognition and they immediately understood because they explained that when the eye tracks an object in motion, you’re not actually on the ball all the way, you’re actually racing your eyes and head to where you think the ball is going to go, and most of us can go about a tenth of a second ahead, and the people with the greatest vision in the world can go two tenths of a second ahead, which is exactly the distance and amount of time it takes to swing. So if you go to swing and it isn’t there, it has literally disappeared in the part of your brain that registers vision.

Jerry Milani is a freelance writer and public relations executive living in Bloomfield, N.J. He has worked in P.R. for more than 30 years in college and conference sports media relations, two agencies and for the International Fight League, a team-based mixed martial arts league, and now is the PR manager for FAN EXPO, which runs pop culture and celebrity conventions across North America. Milani is also the play-by-play announcer for Caldwell University football and basketball broadcasts. He is a proud graduate of Fordham University and when not attending a Yankees, Rams or Cougars game can be reached at Jerry (at) JerryMilani (dot) com.
@gbpackjerry
Previous FloSports To Launch New Sports Vertical Covering Volleyball
Next The Unauthorized History Of Baseball In 100-Odd Paintings