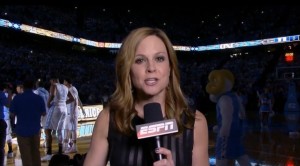 FOX Sports announces the addition of veteran sports reporter Shannon Spake, who joins the network as a sideline reporter for its college football and college basketball coverage and serves as a member of its NASCAR broadcast team on pit road and in the NASCAR RACE HUB studio. Spake also will report from the sidelines for select FOX NFL broadcasts.

Spake’s move to FOX after several years with ESPN represents a “homecoming” for the reporter, who worked for FOX Sports’ SPEED a little more than a decade ago. Beginning in 2005, she reported for SPEED’s NASCAR Nation, co-hosted Backseat Drivers and reported from the NASCAR garage during the network’s coverage of the 2006 Daytona SpeedWeeks.

“Bringing Shannon back into the FOX Sports fold is the next step in ensuring our on-air teams are second-to-none,” said John Entz, EVP, Production & Executive Producer, FOX Sports. “Since her days with SPEED, we proudly have watched her become one of the preeminent reporters on the college sidelines today — one with the unique ability to transition seamlessly to the NASCAR garage. Shannon will be a huge complement to all our broadcast teams.”

Prior to joining FOX Sports, Spake served in multiple roles at ESPN, beginning in 2006. She most recently was a sideline reporter for Saturday college football games and select Bowl games, including a New Year’s Six Bowl. She served as a sideline reporter for ESPN’s Saturday Primetime and Super Tuesday SEC college basketball telecasts. She also worked the 2015 NBA Draft and covered multiple NCAA men’s basketball tournaments and Final Four championships for SportsCenter. Spake also was tasked with pit reporting for ESPN and ABC’s NASCAR coverage and offered reports on NASCAR and college sports for SportsCenter. Additionally, she hosted and reported for NASCAR Now on ESPN2.

“I am thrilled to return to the network that gave me my first opportunity in sports broadcasting,” Spake said. “I have always pushed for diversity in my career — to contribute across multiple platforms while covering a variety of sports — and FOX Sports has given me an amazing opportunity to continue to do that.”

In 2003, Spake was hired as a reporter and producer for WCCB-TV, the FOX affiliate in Charlotte, N.C. The following year, she joined the NBA’s Charlotte Bobcats (now Hornets) to report and produce for C-SET, the team’s regional sports network.

In 1999, Spake interned for Neil Rogers Show on Miami’s WQAM prior to moving to New York City in 2000 to join Nickelodeon as assistant coordinator of on-air promotions. Starting in 2000, she spent two years at CBS – including one at The Early Show as an associate producer. While there, Spake covered historic events such as the 2000 presidential election and the September 11th attacks. She worked as a production assistant on Real Sports with Bryant Gumbel on HBO in 2003 and performed freelance production work for several specialty television projects, including the MTV Video Music Awards, VH-1 Fashion Awards, CBS’ The NFL Today and boxing on HBO.

Jerry Milani is a freelance writer and public relations executive living in Bloomfield, N.J. He has worked in P.R. for more than 30 years in college and conference sports media relations, two agencies and for the International Fight League, a team-based mixed martial arts league, and now is the PR manager for FAN EXPO, which runs pop culture and celebrity conventions across North America. Milani is also the play-by-play announcer for Caldwell University football and basketball broadcasts. He is a proud graduate of Fordham University and when not attending a Yankees, Rams or Cougars game can be reached at Jerry (at) JerryMilani (dot) com.
@gbpackjerry
Previous Nickelodeon’s ‘Soccer Superstar’ Season Two Premieres Friday
Next MLB Network to feature live & new original programming throughout All-Star Week