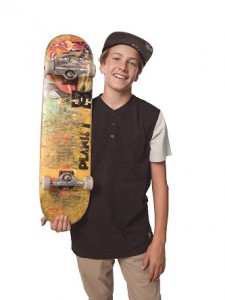 Nickelodeon and 15-year-old skateboarding phenomenon Jagger Eaton give kids a glimpse into the lives of fearless, world-class athletes in the all-new, action-packed docu-series, Jagger Eaton’s Mega Life, premiering Friday, Sept. 9, at 7:30 p.m. (ET/PT). The 20-episode series follows Eaton as he immerses himself in the world of his sports idols – Chris Bosh, Leticia Bufoni, Bubba Wallace, Larry Fitzgerald, Erika Lang, to name a few, who are pushing their limits and inspiring others to do the same. Click here for a sneak peek of Jagger Eaton’s Mega Life.

Along his action-packed journey, Eaton will spend time in the shoes of pro-athletes and face his fears, while learning the demanding ways they train and test themselves to be the best of the best.   Some of his experiences include cage-free diving with sharks in the Bahamas; Heli-boarding down a 10,000-foot mountain in Alaska; Fat-tire biking down Wyoming’s treacherous slopes; and jousting head-to-head on horseback against a world champion jouster. But behind the big tricks and extreme sports accolades is an everyday 15-year-old kid, grounded by his friends and family who are always by his side.

The premiere episode of Jagger Eaton’s Mega Life finds Eaton preparing for a huge skate contest in his hometown of Phoenix, Ariz.  To prep for the competition, Jagger meets up with Arizona Cardinals™ wide receiver Larry Fitzgerald and Bellator MMA fighter Keri Taylor-Melendez for some advice from the pros.

Hailing from Mesa, Ariz., Eaton is one of the most progressive and versatile skateboarders the sport has ever seen. His ability to skate and compete on anything from the streets to the mega ramp puts Jagger in a category of his own. In 2012, at 11 years old, Jagger set the Guinness World Record as the youngest ever X Games competitor when he competed in the Big Air competition against industry veterans.

Jerry Milani is a freelance writer and public relations executive living in Bloomfield, N.J. He has worked in P.R. for more than 30 years in college and conference sports media relations, two agencies and for the International Fight League, a team-based mixed martial arts league, and now is the PR manager for FAN EXPO, which runs pop culture and celebrity conventions across North America. Milani is also the play-by-play announcer for Caldwell University football and basketball broadcasts. He is a proud graduate of Fordham University and when not attending a Yankees, Rams or Cougars game can be reached at Jerry (at) JerryMilani (dot) com.
@gbpackjerry
Previous Brian Kenny Discussion/Booksigning At Yogi Berra Museum on Sept. 27
Next Listen Up: Kornhesier Launches Podcast