Home / News / The Golden Age Of Baseball, Selections From The National Pastime Museum

The Golden Age Of Baseball, Selections From The National Pastime Museum

Jerry Milani August 31, 2016 News Comments Off on The Golden Age Of Baseball, Selections From The National Pastime Museum 1,929 Views 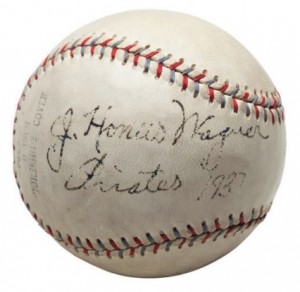 Christie’s is honored to present one of the most important and comprehensive collections of baseball memorabilia and photography ever offered at auction with The Golden Age of Baseball, Selections from the National Pastime Museum, a two-day auction on October 19-20 in New York. The sale is the largest collection of baseball ephemera to appear at an international auction house in more than 15 years. Comprised of a remarkable assemblage of game-used bats, letters, contracts, memorabilia and a treasury of vintage baseball photography, Part I of the sale is devoted to memorabilia and Part II is devoted to photography. With 485 lots in total, estimates start at $300-500 for photographs and memorabilia, while the top lot of the auction is a “Shoeless” Joe Jackson Professional Model Bat, estimated at $500,000-700,000. The contents of the auction are from the National Pastime Museum, which is an online museum based on a private collection of baseball artifacts.

“From baseball’s earliest days through its golden era, the game’s most iconic players are represented in this collection. Of particular interest are the remarkably rare items pertaining to The Negro Leagues and the legendary ballplayers who played in them,” remarks Simeon Lipman, Christie’s Consultant, Pop Culture.

The auction represents the legends of baseball, spanning more than 130 years from the inception of the game through modern day, with items owned and used by icons such as Babe Ruth, Mickey Mantle, Lou Gehrig, Willie Mays, Grover Cleveland Alexander, Jimmy Foxx, as well as a bat used by Derek Jeter. Letters and contracts from Ty Cobb, “Shoeless” Joe Jackson, and Cy Young, in addition to notable pieces relating to Jackie Robinson, Mike “King” Kelly, Roberto Clemente and Christy Mathewson are also available.

The collection is notable for some of the greatest artifacts extant relating to the Negro Leagues and its most celebrated stars such as Satchel Paige, Josh Gibson, and Oscar Charleston. Another feature of the collection is the significant amount of items and photographs detailing the history of Cuban baseball, including Cuban Cigarrillos cards and items signed by Martin DiHigo.

Laura Paulson, Chairman, Christie’s Americas, comments, “The collection, one of the most comprehensive and distinguished of its kind, includes extraordinary offerings that chronicle the profound social and cultural significance of America’s National Pastime. This is a rare opportunity for collectors and enthusiasts to experience and own rare and historical memorabilia, artifacts, and photographs which tell the story of a game that continues to create passion and excitement season after season. We are honored to be presenting this collection to the public and look forward to sharing its treasures in the next months as it tours the United States and in our exhibition galleries in Rockefeller Center in October.”

Jerry Milani is a freelance writer and public relations executive living in Bloomfield, N.J. He has worked in P.R. for more than 30 years in college and conference sports media relations, two agencies and for the International Fight League, a team-based mixed martial arts league, and now is the PR manager for FAN EXPO, which runs pop culture and celebrity conventions across North America. Milani is also the play-by-play announcer for Caldwell University football and basketball broadcasts. He is a proud graduate of Fordham University and when not attending a Yankees, Rams or Cougars game can be reached at Jerry (at) JerryMilani (dot) com.
@gbpackjerry
Previous Listen Up: Kornhesier Launches Podcast
Next RAPIDFORCE, AVP Partner On Chicago Championships This Weekend