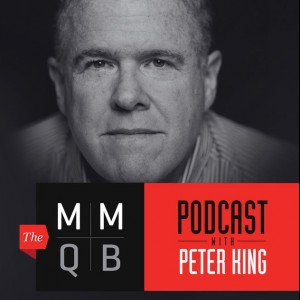 Just when we thought Peter King was everywhere, now you will be able to listen to him anywhere as well. Today, Sports Illustrated Group and DGital Media announced The MMQB Podcast with Peter King will now bring football fans weekly on-demand audio for anything and everything in the game, further expanding King’s footprint that already includes digital, print and his TV time.

“Our business is all about storytelling, and there are few better ways to hear the stories of some the greatest influencers of our time than through a podcast,” King said in a statement. “To have the ability to sit down for real conversations with the biggest names in football—Bruce Arians, John Elway, Michael Bennett, to begin with—and not just three-minute sound bite-type interviews is very exciting. We’re proud to partner with DGital Media and believe it will be a great addition to what we have established with The MMQB.”

“When it comes to professional football I think Peter King,” added Chris Corcoran, Chief Content Officer, DGital Media, who also recently added The Tony Kornheiser podcast to a production lineup that already included Katie Nolan and The Vertical amongst many others.

“There are few in sports and media who have a bigger influence around the field than Peter and we’re excited to bring a new experience to his audience as well as the talented Albert Breer and the rest of The MMQB team. To be able to partner with such talented individuals and have the opportunity to work with the venerated Sports Illustrated brand is truly special.”

Great news for NFL fans just as the season kicks off.

Jerry Milani is a freelance writer and public relations executive living in Bloomfield, N.J. He has worked in P.R. for more than 30 years in college and conference sports media relations, two agencies and for the International Fight League, a team-based mixed martial arts league, and now is the PR manager for FAN EXPO, which runs pop culture and celebrity conventions across North America. Milani is also the play-by-play announcer for Caldwell University football and basketball broadcasts. He is a proud graduate of Fordham University and when not attending a Yankees, Rams or Cougars game can be reached at Jerry (at) JerryMilani (dot) com.
@gbpackjerry
Previous 120 Sports announces sportscasters Michael Kim & Alexa Datt to headline New York based ‘The Morning Run’
Next Colleges Go Into Podcasting