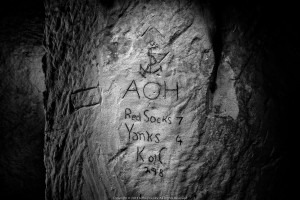 Pictured are two photographs created by American World War I soldiers living in a vast underground city in Picardy, France, spanning 100 acres underground. It’s 1918 – the Red Sox are superstars and would go on to win the 1918 World Series, their last win until breaking “The Curse of the Bambino” in 2004.  But in the same place is Corporal Jack O’Brien, who, though a devoted Chicago Cubs fan, was a Yankee Division soldier, so named because it was comprised of young men from New England.

The Cubs hadn’t won the Series since 1908, 10 years before he would die fighting in World War I. His friends memorialized his death in battle by remembering him by what he cared about – his Cubbies. This is the first time this photo has been shown to the public. The reverse wishbone was the Cubs logo in 1918. Bringing this dedicated Cubs fan and American hero to light a century after his death is a powerful way to tie both of these timely events together (the historic Cubs World Series win and Veterans Day on Nov. 11). 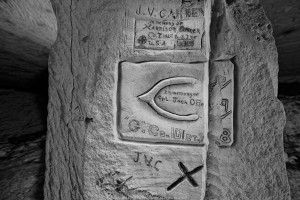 Jeff Gusky, doctor, artist and explorer, is featured in a documentary that will air in Spring 2017 on Smithsonian Channel: In a wheat field in Northern France a rainstorm opens up a mysterious hole, and Gusky descends with his camera. In the darkness his light shines on objects and images sealed underground for 100 years, it’s the hidden world of World War I. Gusky’s mission is to tell the story of Yankee Division in this hidden world of World War I – who these men were, where they came from and what happened to them.  The film will follow his progress which takes him from the underground caves and battlefields of France back to New England where he tracks down some of the descendants of the soldiers whose names he discovered on the walls of the underground city.

Jerry Milani is a freelance writer and public relations executive living in Bloomfield, N.J. He has worked in P.R. for more than 30 years in college and conference sports media relations, two agencies and for the International Fight League, a team-based mixed martial arts league, and now is the PR manager for FAN EXPO, which runs pop culture and celebrity conventions across North America. Milani is also the play-by-play announcer for Caldwell University football and basketball broadcasts. He is a proud graduate of Fordham University and when not attending a Yankees, Rams or Cougars game can be reached at Jerry (at) JerryMilani (dot) com.
@gbpackjerry
Previous Topps Inks Largest Exclusive Deal In Company History With Cubs Superstar Bryant
Next Musburger to Receive Scully Award, Stahl to be Cited with Osgood Award at WFUV Radio’s On the Record Wednesday