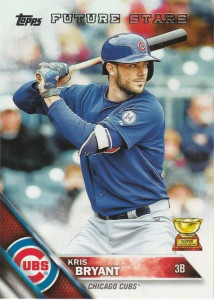 The Topps Company, Inc., the exclusive trading card partner of Major League Baseball, has announced today the signing of Chicago Cubs® superstar Kris Bryant to the largest and most significant exclusive card deal in the company’s baseball history. The momentous multi-year deal will guarantee that autograph cards of Kris Bryant will only be found in future Topps® and Bowman® products starting with 2017 Topps® Baseball Series 1.

“We are beyond excited to secure this exclusive deal with Kris Bryant.” said David Leiner, VP and General Manager of North American Sports & Entertainment for Topps. “Never has The Topps Company executed such a long-term deal with any athlete. Kris is one of the elite players currently in Major League Baseball and we look forward to working with him as his career continues to flourish.”

In addition to signing autographs, Bryant will also be featured as the new cover athlete for Topps BUNT®, the officially licensed MLB Trading Card App. He will also be on the cover of 2017 Topps Baseball Series 1 joining a prestigious group.

“Topps is the premier trading card company and I am honored to be working with them.” said 2015 NL Rookie of the Year Kris Bryant. “I am thrilled to have the opportunity to partner with a company such as Topps.”

Already one of the most sought after players by card collectors, Kris Bryant has shined for the Cubs since his MLB debut on April 17, 2015, becoming a NL All-Star in each of his first two seasons. The 2016 NL MVP candidate has compiled a .293 batting average with 39 homeruns and 101 RBI’s this season while leading the National League in runs scored with 120.

Jerry Milani is a freelance writer and public relations executive living in Bloomfield, N.J. He has worked in P.R. for more than 30 years in college and conference sports media relations, two agencies and for the International Fight League, a team-based mixed martial arts league, and now is the PR manager for FAN EXPO, which runs pop culture and celebrity conventions across North America. Milani is also the play-by-play announcer for Caldwell University football and basketball broadcasts. He is a proud graduate of Fordham University and when not attending a Yankees, Rams or Cougars game can be reached at Jerry (at) JerryMilani (dot) com.
@gbpackjerry
Previous United World Sports Names Jon Hinkin Tournament Director For HSBC Sevens Rugby Series Las Vegas
Next Smithsonian Channel Shares Historic Images Tying In Chicago Cubs’ 2016 World Series Win and Veterans Day