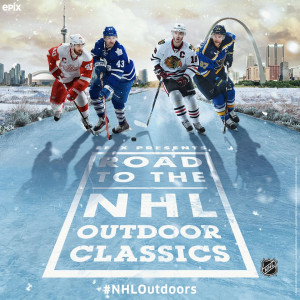 Premium TV network EPIX® and the NHL®, partnering for a third season, today announced that EPIX Presents Road To the NHL Outdoor Classics will make its U.S. Television Premiere on Friday, Dec. 16 at 10pm ET/PT, 9C on EPIX with four weekly episodes. This season, the series tells the stories of the athletes and coaches from four teams and their journey to two games played on outdoor rinks. In commemoration of the League’s Centennial Celebration, the Detroit Red Wings and Toronto Maple Leafs will compete in the 2017 Scotiabank NHL Centennial Classic™ on New Year’s Day in Toronto, Canada. The Chicago Blackhawks and St. Louis Blues meet in the 2017 Bridgestone NHL Winter Classic® on January 2, in St. Louis. In addition to its airing on EPIX, U.S. hockey fans will be able to stream each episode of EPIX Presents Road To the NHL Outdoor Classics as a simulcast on EPIX.com and NHL.com.

Produced by 54-time Emmy® award winner Ross Greenburg, narrated by Bill Camp (Jason Bourne, Birdman, 12 Years A Slave) and presented in partnership with NHL Original Productions, EPIX Presents Road To the NHL Outdoor Classics will provide viewers with a sports tech-driven, intimate look at these athletes in their professional and personal settings, capturing all the action, drama, heartaches and triumphs as they unfold.

“The Road To series is extremely popular with our viewers and NHL fans,” said Mark S. Greenberg, EPIX President and CEO. “I’m excited to have Ross Greenburg back and using his immense talents to give audiences a rare and personal look at how the athletes and coaches prepare for these special games – on and off the ice – while balancing the demands of home and life on the road.”

“Just as the NHL Winter Classic has become a New Year’s tradition and annual high point of our season, the Road To series has become appointment viewing for sports fans each December,” said Steve Mayer, NHL Executive Vice President and Chief Content Officer. “This year, the series takes it to another level, chronicling four teams instead of two as they prepare for and compete in both the NHL Winter Classic and the NHL Centennial Classic. We are looking forward to another exciting edition of the series with producer Ross Greenburg and his team, our partner EPIX and, most important, our clubs and the best athletes in all of pro sports, who provide amazing access.”

The Red Wings, Maple Leafs and Blackhawks are all Original Six™ teams – having played in the NHL in the years prior to the League’s expansion in 1967. The St. Louis Blues joined the NHL that year and are celebrating their 50th anniversary this season.

The Red Wings prepare for the 2017 Scotiabank NHL Centennial Classic™ as veterans of outdoor games, having played in the 2009 Bridgestone NHL Winter Classic® at Wrigley Field in Chicago (a win over the Blackhawks), the 2014 Bridgestone NHL Winter Classic® at Michigan Stadium in Ann Arbor, Mich. (a shootout loss to the Maple Leafs) and the 2016 Coors Light NHL Stadium Series™ at Coors Field in Denver (a win over the Colorado Avalanche). The Maple Leafs are making their second-ever outdoor game appearance following their victory over the Red Wings in 2014.

The Blackhawks will play in their third NHL Winter Classic® on Jan. 2, 2017 (after their 2009 game at Wrigley Field and 2015 matchup with the Washington Capitals at Nationals Park in Washington, D.C.). In addition, the Blackhawks faced the Pittsburgh Penguins in the 2014 Coors Light NHL Stadium Series™ and the Minnesota Wild in the 2016 Coors Light NHL Stadium Series™. The Blues will play in their first-ever game outdoors.

Sports fans can stream Episode #1 as a simulcast on the following digital platforms:

EPIX Presents Road To the NHL Outdoor Classics is an EPIX Original series and presented in partnership with NHL Original Productions. Ross Greenburg is the executive producer; Steve Stern is the coordinating producer; Mike Greenburg, Peter Rogaris, Jonathan Fierro, and Eric Paulen are the producers; Aaron Cohen is the writer; Steve Lamme is the directory of photography; John Sands and Wayne Sharpe are the composers.  Bill Camp is the narrator. Mark Greenberg, Jocelyn Diaz and Ross Bernard are the executive producers for EPIX, Jill Burkhart and Valerie Bishop Pearson are the producers for EPIX.

Jerry Milani is a freelance writer and public relations executive living in Bloomfield, N.J. He has worked in P.R. for more than 30 years in college and conference sports media relations, two agencies and for the International Fight League, a team-based mixed martial arts league, and now is the PR manager for FAN EXPO, which runs pop culture and celebrity conventions across North America. Milani is also the play-by-play announcer for Caldwell University football and basketball broadcasts. He is a proud graduate of Fordham University and when not attending a Yankees, Rams or Cougars game can be reached at Jerry (at) JerryMilani (dot) com.
@gbpackjerry
Previous Annual Major League Baseball Topps® All-Star Rookie Team is Revealed
Next Steiner Sports Holiday Gift Credo: “Think Inside The Box!”