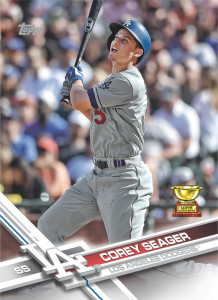 The Topps All-Star Rookie Team began in 1959. The winners also receive a gold “cup” on their official Topps baseball card in the 2017 set, which has been a tradition for many years.

The Topps MLB All-Star Rookie Team – nicknamed the Topps Rookie Cup – is awarded to one player for each position, a right-hander starter, a left-handed starter, and a relief pitcher.

Here is the full list of the 2016 Topps MLB All-Star Rookie Team:

Jerry Milani is a freelance writer and public relations executive living in Bloomfield, N.J. He has worked in P.R. for more than 30 years in college and conference sports media relations, two agencies and for the International Fight League, a team-based mixed martial arts league, and now is the PR manager for FAN EXPO, which runs pop culture and celebrity conventions across North America. Milani is also the play-by-play announcer for Caldwell University football and basketball broadcasts. He is a proud graduate of Fordham University and when not attending a Yankees, Rams or Cougars game can be reached at Jerry (at) JerryMilani (dot) com.
@gbpackjerry
Previous The Topps Company Signs Derek Jeter to an Autographed Trading Card Deal for the First Time in Over a Decade
Next EPIX And NHL Partner For Third Original Series ‘EPIX Presents Road To The NHL Outdoor Classics’