Jerry Milani November 15, 2016 News Comments Off on The Topps Company Signs Derek Jeter to an Autographed Trading Card Deal for the First Time in Over a Decade 2,081 Views 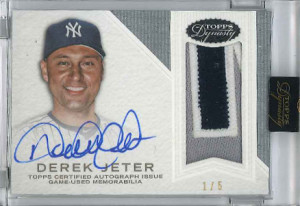 Jeter’s autographs return to Topps products for the first time in over a decade. The addition of the former Yankees captain, one of the greatest players of his generation, will elevate future Topps releases even further.

Jeter, who retired in 2014, finished his career as the all-time Yankees hits leader with 3,465. He has five World Series titles, earned the AL Rookie of the Year Award in 1996, and won MLB All-Star Game MVP and World Series MVP in 2000.

“Adding Derek Jeter autographs to our trading card products will be thrilling for collectors,” said David Leiner, Vice President and General Manager of North American Sports & Entertainment at Topps. “He is one of the most prolific and well-known players of our time, and his addition is one collectors will be clamoring for.”

Jerry Milani is a freelance writer and public relations executive living in Bloomfield, N.J. He has worked in P.R. for more than 30 years in college and conference sports media relations, two agencies and for the International Fight League, a team-based mixed martial arts league, and now is the PR manager for FAN EXPO, which runs pop culture and celebrity conventions across North America. Milani is also the play-by-play announcer for Caldwell University football and basketball broadcasts. He is a proud graduate of Fordham University and when not attending a Yankees, Rams or Cougars game can be reached at Jerry (at) JerryMilani (dot) com.
@gbpackjerry
Previous Joe Buck Discussion/Booksigning at Yogi Berra Museum on Nov. 17
Next Annual Major League Baseball Topps® All-Star Rookie Team is Revealed