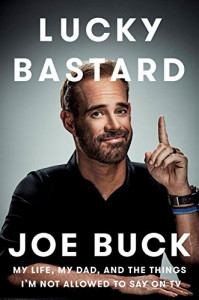 Joe Buck, lead play-by-play broadcaster for the NFL’s biggest games and the World Series, will be appearing at the Yogi Berra Museum & Learning Center in Little Falls, N.J., on Nov. 17 at 7 p.m. for a discussion and signing of his new memoir Lucky Bastard: My Life, My Dad and the Things I’m Not Allowed to Say on TV.

A seven-time Emmy Award winner, Buck is in his 20th year with Fox Sports and recently called the historic Chicago Cubs-Cleveland Indians World Series.  In all,  Buck has called 16 World Series, and four Super Bowls, the most recent being Super Bowl XLVIII between Seattle and Denver in February 2014, the most-watched program in U.S. television history.

Joe is the son of late broadcasting legend Jack Buck, the beloved voice of the St. Louis Cardinals for almost 50 years and whose career spanned parts of six decades.  Jack helped Joe get his broadcasting start at 18, but the young Buck had to prove himself, first as a minor league radio announcer and then on local TV, national TV with ESPN, and then finally on FOX.

Joe Buck now has a successful, award-winning career, but only after a lot of dues-paying and entertaining mistakes. Hilarious and occasionally heartbreaking,  Joe Buck’s Lucky Bastard takes readers into the broadcast booth, into his childhood home, while recounting his funniest stories and interactions with the biggest sports stars of this era.

Jerry Milani is a freelance writer and public relations executive living in Bloomfield, N.J. He has worked in P.R. for more than 30 years in college and conference sports media relations, two agencies and for the International Fight League, a team-based mixed martial arts league, and now is the PR manager for FAN EXPO, which runs pop culture and celebrity conventions across North America. Milani is also the play-by-play announcer for Caldwell University football and basketball broadcasts. He is a proud graduate of Fordham University and when not attending a Yankees, Rams or Cougars game can be reached at Jerry (at) JerryMilani (dot) com.
@gbpackjerry
Previous Joe Buck Discussion/Booksigning at Yogi Berra Museum Nov. 17
Next The Topps Company Signs Derek Jeter to an Autographed Trading Card Deal for the First Time in Over a Decade