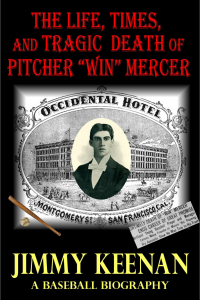 Even avid baseball fans are not likely to have heard of Win Mercer. His career–and, sadly, his life–over just before the detente between the National League and upstart American League would lead to the first World Series, Mercer toiled for always losing and mostly dismal Washington teams in seven of his nine years in the big leagues. Though a popular figure, in particular in the nation’s capital, he remains a forgotten footnote in the sport’s history.

In his book The Life, Times and Tragic Death of Pitcher Win Mercer (2016, self published, 181 pps.), author Jimmy Keenan examines Mercer’s career and untimely death just after New Years 1903 while on a barnstorming tour with other major leaguers. Known at the time for a propensity toward gambling and a bit of womanizing, Mercer’s death was ruled a suicide when a rubber tube extending from a gas fixture was found in his mouth in a hotel room while on the tour.

Details on Mercer’s life are more plentiful than those of his death, for which Keenan offers a few theories. Mercer’s connection with gamblers, in an era during which such relationships were quite common, may have played a role, a series of questionable letters revealed before and after his death adding layers to the mystery. The case seems to not have been investigated in any depth, and though it gained some notoriety at the time, perhaps the untimely demise of a much bigger star at the time, Ed Delehanty a few months later, relegated Mercer’s death to the back of baseball fans’ minds.

Keenan’s work is mostly standard biography, providing a slice of baseball life just before and at the turn of the 20th century. Mercer began his career as a mostly above-average pitcher for the Washington Senators of the National League, toiling for six years and nearly 1800 innings for a succession of second-division clubs. He was one of the team’s most popular players and what today might be considered the face of the franchise. That the teams were poor and the franchise eventually was disbanded in the purge of teams after the 1899 season likely contributed even more to his obscurity today.

Keenan does a good job of chronicling Mercer’s career, from his early days in Ohio through his major league career which included late stops in New York, again in Washington with the new A.L. franchise in its inaugural 1901 season, and finally Detroit, where he was slated to serve as the equivalent of player-manager at age 28. Though showed by injuries, Mercer had a revival season of sorts with the Tigers in ‘02 and by all accounts was looking forward to the upcoming campaign.

This makes his suicide seem even more unlikely, a position Keenan supports through revelation of as many facts as seem to be available more than a century later. Most of his research appears to come from newspaper accounts of the time; the reader may wonder if any original documents are extant. Apparently not, but that fact is not necessarily abundantly clear from the text.

Mercer’s story is for sure worth the examination that The Life, Times and Tragic Death provides. Keenan uncovers enough research to give readers plenty of fodder to piece together theories of his death, and perhaps more importantly to remember his life.

Jerry Milani is a freelance writer and public relations executive living in Bloomfield, N.J. He has worked in P.R. for more than 30 years in college and conference sports media relations, two agencies and for the International Fight League, a team-based mixed martial arts league, and now is the PR manager for FAN EXPO, which runs pop culture and celebrity conventions across North America. Milani is also the play-by-play announcer for Caldwell University football and basketball broadcasts. He is a proud graduate of Fordham University and when not attending a Yankees, Rams or Cougars game can be reached at Jerry (at) JerryMilani (dot) com.
@gbpackjerry
Previous Steiner Sports Holiday Gift Credo: “Think Inside The Box!”
Next World’s Biggest Clubs Unite to Create Dugout – The Ultimate Digital Football Platform for Fans