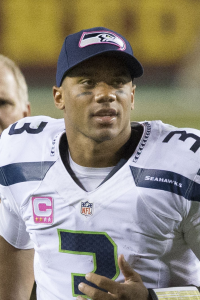 The Seattle Seahawks Russell Wilson (No. 1), New York Giants Odell Beckham Jr. (No. 2) and the Houston Texans JJ Watt (No.3) were officially named the Top 3 Most Valued Athletes in Social Media of 2016 in a ranking created in partnership between MVPindex™ and 120 Sports. The ranking includes U.S. professional and Olympic athletes.

At 9 p.m. ET tonight, 120 Sports will reveal the full list and take a deeper look at the Top Valued Athletes in Social Media on its nightly sports show, The Rally, a two-hour, first-of-its-kind interactive prime-time highlights show exclusively on Twitter. 120 Sports uses up-to-the-moment insight from consumer trends to shape the way it produces its daily live and on-demand programming, providing real-time data on what is resonating most with sports fans.

The National Football League dominated the 2016 ranking with 9 players in the Top 25. The NBA followed with five of the Top 25 athletes. Wilson claimed the top spot for the second straight year with an overall ranking of 0.983, remaining at the center of the social spotlight this year not only for his athletic performance, but also for his recent marriage to singer Ciara.

The 120 Sports talent team will provide insights and analysis on the Top 25 list, as well as break down the top viral trends, videos and photos on social media from this past year, ranking their top 3 in a variety of categories that resonated with sports fans this year like “Best Athlete & Team Mannequin Challenge,” “Cutest Athlete’s Kid Dance,” and “Best Workout Session Video.”

“We produce and deliver sports content based on whatever is the hottest story as indicated by what is trending on social media and what sports fans are talking about on social platforms,” said Jason Coyle, president of 120 Sports. “MVPindex helps us to quantify the commanding voices and influencers on social media from the past year so we can continue to relate with our fans by showcasing the athletes that matter most to them.”

The 2016 list reveals interesting findings including a spotlight on the growth in popularity of MMA/UFC in the past year, as both McGregor (No.5) and Ronda Rousey (No. 18) are featured in the Top 25.

“For years, the yard stick in determining social media value was based solely on the number of followers someone had. But at MVP we know that quantity does not mean quality,” said MVPindex co-founder Kyle Nelson. “With our sophisticated Engagement Value Assessment™ tool, we look at social media impressions, engagement, virality and social authority to help figure out what it’s all really worth.”

Nelson continued: “This year’s list rewarded those athletes who were able to leverage their success on the field of play to also win on social. They were able to consistently drive high levels of engagement through compelling content and authentic conversations with consumers. This not only helps build their own personal brands but also makes them the most effective ambassadors for the brands they represent.”

To watch the full reveal of the Top 25 ranking results this evening including an additional spotlight on the Top 30 Social Athletes Under 30, visit rally.twitter.com from 9 -11 p.m. ET.

Jerry Milani is a freelance writer and public relations executive living in Bloomfield, N.J. He has worked in P.R. for more than 30 years in college and conference sports media relations, two agencies and for the International Fight League, a team-based mixed martial arts league, and now is the PR manager for FAN EXPO, which runs pop culture and celebrity conventions across North America. Milani is also the play-by-play announcer for Caldwell University football and basketball broadcasts. He is a proud graduate of Fordham University and when not attending a Yankees, Rams or Cougars game can be reached at Jerry (at) JerryMilani (dot) com.
@gbpackjerry
Previous Fanatics, Uber Team To Deliver Clemson National Title Merchandise
Next Toronto Blue Jay Josh Donaldson To Appear In HISTORY’s Drama Series ‘Vikings’ On Wednesday, January 18 At 9 PM ET/PT