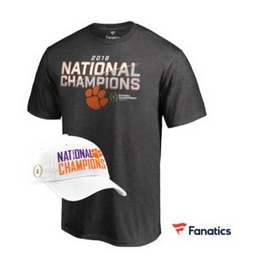 Fanatics, the global leader in sports merchandise and official retailer of the College Football Playoff National Championship, and ride-sharing app Uber are teaming up to deliver college football national championship merchandise on-demand to fans in South Carolina today. Official national championship hats and shirts will be available for sale through the Uber app and delivered to fans’ doorsteps within minutes between 12:30-6 p.m. today in Clemson and Greenville.

How it works in those markets:

· Today, open your Uber app and request ‘CHAMPS’ as a ride option from 12:30 p.m. to 6 p.m. for the chance to purchase official College Football Championship merchandise.
· If connected, a driver will be curbside in minutes with your Fanatics gear.
· Once your vehicle arrives, order an exclusive hat and/or T-shirt. You’ll be charged for your purchase via the Uber app.
It’s that easy.

Fanatics executed a similar promotion with Uber in Chicago the day after the Cubs won the World Series – average delivery time for Cubs championship merchandise was under eight minutes.

Jerry Milani is a freelance writer and public relations executive living in Bloomfield, N.J. He has worked in P.R. for more than 30 years in college and conference sports media relations, two agencies and for the International Fight League, a team-based mixed martial arts league, and now is the PR manager for FAN EXPO, which runs pop culture and celebrity conventions across North America. Milani is also the play-by-play announcer for Caldwell University football and basketball broadcasts. He is a proud graduate of Fordham University and when not attending a Yankees, Rams or Cougars game can be reached at Jerry (at) JerryMilani (dot) com.
@gbpackjerry
Previous Great Dunbar HS Teams Chronicled In New Book
Next 120 Sports And MVPindex Present Most Valued Athletes On Social Media Of 2016