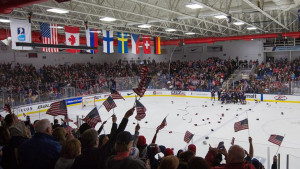 The event — which serves as an audition for players seeking to make their federation team that will compete at the 2018 International Ice Hockey Federation World Junior Championship, Dec. 26, 2017 – Jan. 5, 2018, in Buffalo, New York — begins Friday (July 28) at USA Hockey Arena in Plymouth, Michigan, and features teams from the U.S., Canada, Finland and Sweden.

The six-game NHL Network coverage begins on Wed., Aug. 2, with Canada-Finland at 1 p.m. ET and USA-Sweden at 4 p.m., while on Fri., Aug. 4, fans will see Sweden vs. Canada at 1 p.m. and Finland vs. USA at 4 p.m. NHL Network’s coverage concludes with two of the biggest rivalry games in the sport on Sat., Aug. 5, with Sweden facing Finland at 4 p.m., and USA taking on Canada at 7 p.m.

In addition, HockeyTV will provide live streaming coverage of the first three days of competition – six games total – including a pair of U.S.-Canada split-squad matchups on Tues., Aug. 1.

All total, 12 games over eight days will be contested and tickets can be purchased online here or by calling the USA Hockey Arena Box Office at 734-453-8400.

In total, 116 of the 144 players set to take part in the week-long showcase have been drafted or signed by an NHL club, including 65 who were first or second round selections. Of those players, 17 are American with 10 having been chosen in the first round, including 2017 picks Casey Mittelstadt(Buffalo), Josh Norris (San Jose), Jake Oettinger (Dallas), Ryan Poehling (Montreal) and Kailer Yamamoto (Edmonton).

Jerry Milani is a freelance writer and public relations executive living in Bloomfield, N.J. He has worked in P.R. for more than 30 years in college and conference sports media relations, two agencies and for the International Fight League, a team-based mixed martial arts league, and now is the PR manager for FAN EXPO, which runs pop culture and celebrity conventions across North America. Milani is also the play-by-play announcer for Caldwell University football and basketball broadcasts. He is a proud graduate of Fordham University and when not attending a Yankees, Rams or Cougars game can be reached at Jerry (at) JerryMilani (dot) com.
@gbpackjerry
Previous “On Par with Darius Rucker” debuts Wednesday on SiriusXM
Next Equestrian Lifestyle Channel RIDE TV Continues To Expand In Canada