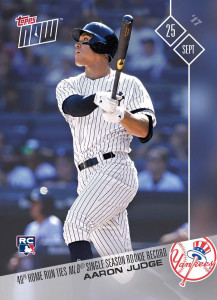 Yankees RF Aaron Judge’s record-setting rookie year has included plenty of highlights and accolades. One measure of his immense popularity is his appearance on seven of the top 10 Topps NOW cards issued to date in 2017. Judge, featured again today after his two-homer peformance on Monday set the mark for rookie round-trippers (50 and counting), has accounted for the first, second, third, seventh, eighth, ninth and tenth highest selling card of the year, topping out at 8997 sold of the one featuring his Home Run Derby title and 8623 of the one commemorating his 495-foot blast at Yankee Stadium and two-homer day on June 11.

Judge also ranks No. 1 with 26 total cards issued with his likeness this year, outdistancing fellow rookies Cody Bellinger of the Dodgers and Rhys Hoskins of the Phillies.

The latest Judge card is available through 3 p.m. Wednesday at https://www.topps.com/toppsnow.

Topps NOW is the joint venture between Topps and MLB that provides the best images to fans on a daily basis. It has sold just under ONE MILLION cards in less than two seasons, making it the most successful business platform for TOPPS in recent history.

Jerry Milani is a freelance writer and public relations executive living in Bloomfield, N.J. He has worked in P.R. for more than 30 years in college and conference sports media relations, two agencies and for the International Fight League, a team-based mixed martial arts league, and now is the PR manager for FAN EXPO, which runs pop culture and celebrity conventions across North America. Milani is also the play-by-play announcer for Caldwell University football and basketball broadcasts. He is a proud graduate of Fordham University and when not attending a Yankees, Rams or Cougars game can be reached at Jerry (at) JerryMilani (dot) com.
@gbpackjerry
Previous Green Bay Packers Quarterback Aaron Rodgers Signs Exclusive Collectibles Deal with Steiner Sports Memorabilia
Next Spalding, Lillard Introduce Digital Content Series