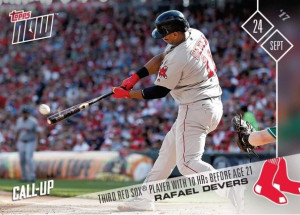 This season’s Topps® MLB All-Star Rookie Team features one of the strongest classes in its 58-year history with record breakers, rising stars and potential award winners.

“This is one of the most impressive Topps MLB All-Star Rookie Team classes I have seen,” said David Leiner, Vice President and General Manager of Topps North American Sports & Entertainment. “It shows how incredibly popular baseball was this year with its young breakout stars. They join an incredible group of players who have won the Topps Rookie Cup in the past and will have the special logo appear on their Topps trading cards next season.”

For the second year in a row, baseball fans can get special TOPPS NOW® cards of the Topps MLB All-Star Rookie Team immediately with an exclusive set available on Topps.com.

The members of the Topps MLB All-Star Rookie Team will have their 2018 flagship trading cards feature a “Rookie Cup” logo depicting the honor.

Here’s the full list of the 2017 Topps All-Star Rookie Team:

Jerry Milani is a freelance writer and public relations executive living in Bloomfield, N.J. He has worked in P.R. for more than 30 years in college and conference sports media relations, two agencies and for the International Fight League, a team-based mixed martial arts league, and now is the PR manager for FAN EXPO, which runs pop culture and celebrity conventions across North America. Milani is also the play-by-play announcer for Caldwell University football and basketball broadcasts. He is a proud graduate of Fordham University and when not attending a Yankees, Rams or Cougars game can be reached at Jerry (at) JerryMilani (dot) com.
@gbpackjerry
Previous New Funding Opens Doors For opendorse
Next Talk Sporty to Me Founder Jen Mueller “Grabs Life by the Balls”