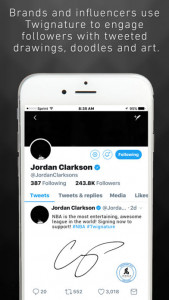 Whenever Harvey Schiller puts his name to something the sports and media world takes notice. Now Schiller, former chair of the USOC, commissioner of the SEC, president of International Baseball, creator of networks like YES and Turner, has literally found a cutting edge company that will have his name, in the digital space.

Media and e-Signatures platform Twignature,  a platform for social and personal communications, today announced that Schiller will join as Chairman, as well as being among a group making a $3 million dollar investment in the company. The Brooklyn native, an Air Force vet and Brigadier General, is also part of the investment group that is made up of 50% Armed Forces veterans.

“We are very pleased to expand our cyber signatures technology with a scalable e-signatures service for social networks, starting with ‘Twignature,'” said Drew Bartkiewicz, Founder and CEO of lettrs, Inc. (the Twignature parent company) and himself a West Point graduate said in a statement.  “Dr. Schiller is a respected media veteran and accelerates our growth in influencer networks looking to diversify their associations with brands.”

The Twignature app is now available on iTunes and activates an immediate digital marketplace for authenticated, distributed and sponsored signatures across the Twitter network.  Twignature’s decentralized service uses smartphone biometrics and blockchain distribution principles to activate a unique number, ledger and seal of authenticity for signed Tweets, including signature location, device, and even whether the original autograph was associated with a major brand.  Similar to Docusign, but for social and personal communications, the patented Twignature service enables verified e-signatures on Twitter, which cross reference to associated media and brand sponsors. The service scales authenticity while marginalizing fake signatures, “troll” accounts, and those manufactured tweets of less social value.

“I joined the Twignature team because I believe that the field of authenticated mobile signatures, as truly original marks in space and time, will create a whole new class of higher quality social media, communications and content than exists today,” Schiller added. “Twignature can become the Blockchain of digital signatures, for a class of content that makes digital memorabilia real, curated and valued by brands and fans alike.”

Bartkiewicz, a self-made entrepreneur, was named one of Goldman Sachs’ “Top 100 Most Intriguing Entrepreneurs” in 2016, while that same year his property, lettrs, was also cited as a Forbes Top 25 Veteran founded business.  His successful patent for a “cyber method” to authenticate mobile signatures, marrying biometrics and media on smartphones, has made him a force in the entrepreneurial arena.

And now he has a big name leading his business efforts, one who literally signed on the dotted line, albeit a virtual one.

Jerry Milani is a freelance writer and public relations executive living in Bloomfield, N.J. He has worked in P.R. for more than 30 years in college and conference sports media relations, two agencies and for the International Fight League, a team-based mixed martial arts league, and now is the PR manager for FAN EXPO, which runs pop culture and celebrity conventions across North America. Milani is also the play-by-play announcer for Caldwell University football and basketball broadcasts. He is a proud graduate of Fordham University and when not attending a Yankees, Rams or Cougars game can be reached at Jerry (at) JerryMilani (dot) com.
@gbpackjerry
Previous NBCSN, CNBC & USA Network To Carry More Than 450 Hours Of PyeongChang Winter Olympics Coverage
Next Future In US? Soccer In UK Strengthens Data Integrity With Landmark Partnership