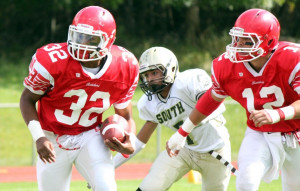 GEICO returns for the second year as title sponsor of the State Champions Bowl Series. For the third time since 2014, this unique event will allow high school football champions from different states to play against each other in post-season bowl games to be televised live on ESPNU. The games will also be available via the ESPN App. Participating teams will play in a single game matchup, with a total of two games to take place at GCU Stadium at Grand Canyon University in Phoenix, Ariz. on Saturday, Dec. 23. Games will kick off at 6:00 p.m. and 9:30 p.m. EST. ESPN play-by-play commentator Kevin Brown and analyst Craig Haubert will call both games.

With its completion in August of 2016, GCU Stadium is home for the Grand Canyon men’s and women’s soccer programs, and is considered one of the country’s preeminent collegiate soccer stadiums. The GEICO State Champions Bowl Series will mark the first time the venue has hosted a football event. The state-of-the-art facility features seating capacity for more than 6,000 spectators and includes an academic wing underneath the stadium. At 41,852-square-feet, the stadium provides 3,000 shaded individual chairback seats and is located in the heart of GCU’s campus. The all-natural turf is surround by a 10-foot grass berm on three sides to house an additional 3,000 spectators, and is an ideal setting for this “Bowl Game” experience.

“The GEICO State Champions Bowl series provides ESPNU another avenue to present the next generation of college athletes on a national stage,” said Dan Margulis, ESPN Senior Director College and High School Sports Programming. “This event, created by Paragon Marketing Group, will cap what has been an exciting football season.”  Paragon Marketing Group worked with GEICO to create this fan-friendly event that rewards State Champions for their excellence and celebrates high school football on a national level. “We thank the state associations for allowing their champions to participate, and look to expand the event in future years,” said Rashid Ghazi, Partner, Paragon Marketing Group.

“Grand Canyon University is thrilled to host the GEICO State Champions Bowl Series at GCU Stadium,” GCU Vice President of Athletics Mike Vaught said. “This event features some of the top high school football talent in the country for what will be incredible competition for the teams, fans, and those watching at home on ESPN. We have state-of-the-art facilities here at GCU, a great relationship with ESPN, and are excited to combine the two together for this marquee event.”

The GEICO State Champions Bowl Series took place previously in 2014 at Florida Atlantic University Stadium in Boca Raton, and in 2016 at Ford Center at The Star in Frisco, Texas.

Jerry Milani is a freelance writer and public relations executive living in Bloomfield, N.J. He has worked in P.R. for more than 30 years in college and conference sports media relations, two agencies and for the International Fight League, a team-based mixed martial arts league, and now is the PR manager for FAN EXPO, which runs pop culture and celebrity conventions across North America. Milani is also the play-by-play announcer for Caldwell University football and basketball broadcasts. He is a proud graduate of Fordham University and when not attending a Yankees, Rams or Cougars game can be reached at Jerry (at) JerryMilani (dot) com.
@gbpackjerry
Previous Vineyard Vines Extends Partnership With Jim Nantz On Forget-Me-Knot Collection
Next NLL’s Philadelphia Franchise Announces Its Brand Name and Logo