Home / News / eSports.Com – a Major eSports Platform is on its Way

eSports.Com – a Major eSports Platform is on its Way

Jerry Milani January 11, 2018 News Comments Off on eSports.Com – a Major eSports Platform is on its Way 2,272 Views 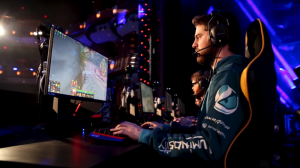 With an extensive perimeter advertising at the top match of the Bundesliga, Bayer 04 Leverkusen vs FC Bayern Munich on Friday (Kickoff 20.30 CET), eSports.com will officially launch its new platform.

The new platform has aspiring goals: eSports.com wants to become the biggest eSports portal in the world. A portal for all those, who call themselves gamers, no matter if they are professionals or beginners. Starting with high quality content, statistics, information about certain events and streaming up until coaching and guides – every important information will be found on eSports.com. Starting in the second quarter of 2018, eSports.com will also be one of the first news portals on the planet, on which gamers can send in content as well – and can earn money with it in a transparent way.

There are already existing cooperations, such as with the appstore Overwolf (http://www.overwolf.com), handball top club THW Kiel and the Celebrity Darts World Championship, hosted by German television station ProSieben – more details and arrangements will be announced in the coming weeks.

The official currency of eSports.com is the ERT (“Esports Reward Token”), a crypto token, which can be directly acquired on http://www.esports.com and which is now tradeable, after a successful ICO (“Initial Coin Offering”), on the cryptocurrency exchanges Coinexchange (http://www.coinexchange.io) and C-Cex (http://www.c-cex.com).

Aided by their new platform, the eSports.com Team wants to professionalize the fast growing world of eSports and make eSports a renowned sport worldwide. Stay tuned.

Jerry Milani is a freelance writer and public relations executive living in Bloomfield, N.J. He has worked in P.R. for more than 30 years in college and conference sports media relations, two agencies and for the International Fight League, a team-based mixed martial arts league, and now is the PR manager for FAN EXPO, which runs pop culture and celebrity conventions across North America. Milani is also the play-by-play announcer for Caldwell University football and basketball broadcasts. He is a proud graduate of Fordham University and when not attending a Yankees, Rams or Cougars game can be reached at Jerry (at) JerryMilani (dot) com.
@gbpackjerry
Previous NextVR and WWE® Bring Fans Closer to the Action with Virtual Reality
Next Nickelodeon, John Cena Prep Kids Choice Awards, Other Projects