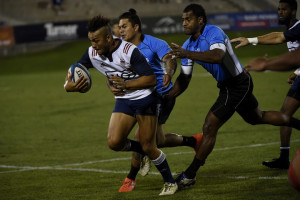 While the rising sport of rugby in the United States continues to look for widespread brand support, one thing is for sure; if you are involved in the fast paced Olympic version of Rugby Sevens and are in the collegiate space, you will know Penn Mutual.

The 150 year old company continues to make its mark, and almost its only mark in its history, in the sports marketing space in and around college rugby and the demo that it is connected to, be it big events like the Penn Mutual Collegiate Rugby Championships, smaller platforms like the National Small College Rugby Organization, or a series of one-offs which will resonate with a core group they want to reach.

The latest foray came Tuesday, when United World Sports, the owner and operator of the largest annual rugby events in the United States and a strong business partner of Penn Mutual’s rugby work, announced that Penn Mutual will not only sponsor a new rugby sevens international event in San Francisco next month, the Silicon Valley 7’s, but will also be the title Sponsor of the Collegiate Fall Rugby Classic, which will also be held at San Jose’s Avaya Stadium on Saturday, November 4 and Sunday, November 5.

The eight team college field for the event will be finalized this week, but already has Stanford, USC, and Santa Clara and will surely include more west coast programs, making it an interesting compliment to the onsite program the Philadelphia area company has when the CRC takes up ground every spring back east.

“Penn Mutual has seen great return in our business goals through the support of rugby, especially at the collegiate level, and we are very pleased to be part of Silicon Valley International 7’s rugby weekend,” said Tom Harris, Executive Vice President, Distribution, at Penn Mutual in a statement. “The growth the sport is seeing in this country is tremendous and we are looking forward to a great weekend in November.”

So is the expansion or amplification of Penn Mutual’s rugby work as a way to reach college students good sports business sense? At least one senior marketer who also works in the college space thinks so.

“I applaud Penn Mutual for their increased involvement in College Rugby as they are positioning themselves as a driver of rugby growth in the United States and are leveraging the power of college sports in supporting and amplifying both B to B and B to C business initiatives,” added Ray Katz, co-founder and Chief Operating Officer of Collegiate Sports Management Group and a professor at Columbia University. “First, these events are run extremely well by United World Sports, and this offers powerful equity transfer to Penn Mutual. Second, a marketing effort such as this where a visionary brand attaches themselves to a smaller growth property, is likely to be more effective in driving achievement of brand Key Performance Indicators by being inexorably attached to the competition and event. Penn Mutual’s continued increased commitment to ‘ownership’ of the college rugby space demonstrates that it is more effective to be the first sponsor of a powerful but smaller college property rather than being the 31st sponsor of a larger college property.”

As far as the rest of the weekend on a global scale, Penn Mutual and the participating colleges and fans will be part of an international field that marks the first time that squads from the Island nations of Tonga, Samoa and Fiji, will be in the same event in the US since 2007.  It is also the first time the Irish National Sevens squad will play in the United States and will be the last international tune-up for rising nations Canada and the United States, as well as traditional powers like New Zealand, Japan and Australia, as they ready for the 2018 HSBC Sevens World Series. The event will also be the first time the Chinese National team will appear in the United States with England and Chile rounding out the field for the two days, which are expected to fill Avaya Stadium, the home of the San Jose Earthquakes, and be the next great step forward for rugby as a marketing, business and activation platform in the United States with an iconic American insurance brand front and center, yet again.

“Rugby’s growth in this country is being fueled not just by an expanding fan base and talented players but by business support, and there are few companies doing more in the business space for the sport than Penn Mutual,” continued Jon Hinkin, Tournament Director Silicon Valley 7’s in a release. “We are elated to have them come on board in two roles for this new and unique global rugby event, and are proud to work with them year-round on their efforts to reach their business objectives through rugby activation.”

Penn Mutual’s presence and engagement again will help insure that a new rugby project gets off the ground well, and becomes another staple for a sport still moving up in the U.S. sports landscape.

Jerry Milani is a freelance writer and public relations executive living in Bloomfield, N.J. He has worked in P.R. for more than 30 years in college and conference sports media relations, two agencies and for the International Fight League, a team-based mixed martial arts league, and now is the PR manager for FAN EXPO, which runs pop culture and celebrity conventions across North America. Milani is also the play-by-play announcer for Caldwell University football and basketball broadcasts. He is a proud graduate of Fordham University and when not attending a Yankees, Rams or Cougars game can be reached at Jerry (at) JerryMilani (dot) com.
@gbpackjerry
Previous Atlantic 10 Announces Extensive Package Of Men’s Basketball Games On Stadium Network
Next New Company Takes A Monsterful Swing At The VR Space…In Baseball