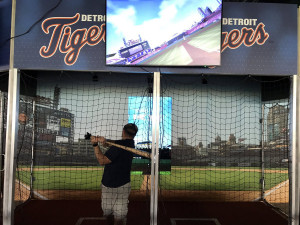 One of the big questions about Virtual Reality is how fast will it adapt to the masses. Is it a training tool or is it experiential, and once you try it is it a must have? That’s a question marketers, especially around sports, are asking every day. Is it viable for the long term, and if so, when?

One new company looking to help solve both those paths is Monsterful VR, and this week they announced a new partnership to try and solve the training side, at least for baseball. The New York based company came up with a partnership with longtime baseball scout Jeremy Bloom and his company, PROGRAM 15, to launch a VR training tool for rising stars in 2018 as part of the New Balance Baseball Future Stars Series. The plan is to have young players heading to the pros use Monsterful at their academy training sessions, while having the data stored to be shared in real time across their nationwide network of instructors, comparing one elite player to another as they work in real time against each other. Solitary experience for VR no more, at least in theory.

“I’m thrilled to announce this partnership as the next evolution in our fast growing business,” said Jarett Sims, Monsterful VR founder in a statement. “We’re interested in ensuring that from end to end we have an ecosystem where kids age six and up to Major League players are using our system effectively to improve their play quality. Jeremy Booth’s experience in evaluating and coaching some of the great players in the game today as well as working with the younger athletes on a consistent basis, brings a lot to Monsterful so it’s exciting to work with him and now have him on our board as well. Baseball is our next step, but not our last for sure.”

Monsterful VR’s RBI-VR virtual reality gaming engine is built on a proprietary process developed by Monsterful VR engineers for compiling and calculating the enormous amount of data used to recreate the throwing mechanics, correct biomechanics, vertical and horizontal release point of any pitcher in the league with near 100% accuracy. Utilizing virtual reality to enhance pitch recognition and reaction time while minimizing injury risk is the perfect marriage of sport and technology. One of the revolutionary features built into RBI-VR is that it does not just provide players with the experience of hitting against Major League level pitching: the platform also evaluates, documents and provides Major League level feedback to the hitter that can also be made available to recruiters and scouts.

The fully immersive nature of the RBI-VR hitting experience is based on a physics engine built by Monsterful VR which accurately replicates the Magnus Effect – the phenomenon that governs the spin and flight of the ball once thrown by the pitcher – and the accurate physics of the bat + ball collision. The software is not just a close representation of the game, but a highly refined, accurate and measurable re-creation of what it is to hit against Major League pitching, and allows for the capture of the tens of thousands of new data points measured by the system with each swing.

The result is not just a simulation, but an interactive immersive experience that will pit player against player with all data stored in the cloud. Monsterful VR successfully tested a somewhat similar product with the Detroit Tigers in September at Comerica Park, and the response from fans for the commercial product was so strong that other teams have already inquired about implementation in 2018.

It is that type of crossover appeal, from delicate nuance in competitive baseball to a fan friendly adaptation that looks and feels real, which will help propel platforms like VR and AR from one time experiences to can’t miss for both fans and those taking the game more seriously.

Monsterful seems to be on to something here for the Next Gen, now we can watch and maybe try, to see where it goes, at a ballpark or an academy across the country.

Jerry Milani is a freelance writer and public relations executive living in Bloomfield, N.J. He has worked in P.R. for more than 30 years in college and conference sports media relations, two agencies and for the International Fight League, a team-based mixed martial arts league, and now is the PR manager for FAN EXPO, which runs pop culture and celebrity conventions across North America. Milani is also the play-by-play announcer for Caldwell University football and basketball broadcasts. He is a proud graduate of Fordham University and when not attending a Yankees, Rams or Cougars game can be reached at Jerry (at) JerryMilani (dot) com.
@gbpackjerry
Previous Penn Mutual Again Helps Insure Growth For College Rugby
Next EDGEtv Celebrates Launch of Adventure Lifestyle Entertainment Network