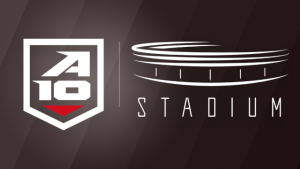 The Atlantic 10 Conference announced today the addition of 22 men’s basketball broadcasts on the Stadium network, the new, fully programmed, 24/7, multiplatform sports network with distribution across both the linear television and digital space.

Stadium will air 20 regular season A-10 men’s contests nationally. Games will appear in over 60 markets via OTA broadcast as well as on WatchStadium.com, the Stadium iOS and tvOS apps, Twitter (@WatchStadium), Pluto TV and select distribution partners. In addition to the regular season games, Stadium will also air the opening round of the Men’s Basketball Championship on Wednesday, March 7, from the Capital One Arena in Washington, D.C.

“We are always looking for opportunities to expand the visibility and brand of the Atlantic 10 and our member schools, and our partnership with Stadium provides our fans, both nationally and internationally, with multiple options to watch our teams,” states Commissioner Bernadette V. McGlade.

All 14 basketball programs will be featured in the Stadium package, which will tip-off on Nov. 25 with a non-conference matchup of Georgetown at Richmond.

“We’re excited to partner with the A-10 to showcase its rich basketball pedigree on Stadium,” said Stadium CEO, Jason Coyle. “We view the A-10 as a premium basketball conference, and we are confident that the partnership will prove to be a highly successful one for the conference and our audience.

A-10 institutions will make 149 nationally television appearances in 2017-18 across the league’s three media partners of ESPN, CBS Sports Network, an NBCSN, and the addition of the Stadium broadcasts.

Stadium will be announcing its full college basketball lineup in the weeks ahead.

Jerry Milani is a freelance writer and public relations executive living in Bloomfield, N.J. He has worked in P.R. for more than 30 years in college and conference sports media relations, two agencies and for the International Fight League, a team-based mixed martial arts league, and now is the PR manager for FAN EXPO, which runs pop culture and celebrity conventions across North America. Milani is also the play-by-play announcer for Caldwell University football and basketball broadcasts. He is a proud graduate of Fordham University and when not attending a Yankees, Rams or Cougars game can be reached at Jerry (at) JerryMilani (dot) com.
@gbpackjerry
Previous SI, Minute Media’s 90min to Enhance Soccer Coverage on SI.com
Next Penn Mutual Again Helps Insure Growth For College Rugby