ESPN Celebrates 25 Years of “This is SportsCenter” with Sunday Specials

Jerry Milani May 21, 2020 News, On The Air Comments Off on ESPN Celebrates 25 Years of “This is SportsCenter” with Sunday Specials 1,261 Views 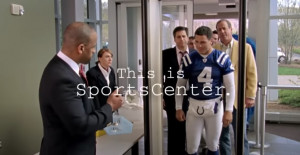 They have entertained and amused ESPN viewers for 25 years and along the way have created lasting memories for sports fans.

ESPN will celebrate 25 years of iconic “This is SportsCenter” commercials with three programs airing Sunday, May 24, beginning at noon ET on ESPN. The shows will look back at dozens of popular and memorable spots in the TISC franchise that is still going strong today.

SportsCenter anchors Steve Levy and Elle Duncan will host the programs, guiding viewers through the history and memorable moments while also sharing some of their own TISC memories. The programs will have three different areas of focus:

Noon (ET) – The Best of This is SportsCenter: 25 Years and Counting

The one-hour program spans the best of TISC from its debut in 1995 all the way through the most recent batch of commercials in 2019.  With SportsCenter anchors starring in most TISC commercials, among show segments will be the Best of Stuart Scott, the Best of Scott Van Pelt and spots with other anchors including show hosts Levy and Duncan. The show also will trace the evolution of the SportsCenter studio and include a tour of the ESPN campus. .

1 p.m. – The Best of This is SportsCenter: The Superstars

Focusing on the scores of superstar athletes who have appeared in the TISC commercials, the one-hour program will have a “Best of the GOATS” segment with athletes such as Kobe Bryant, LeBron James, Serena Williams, Roger Federer, Tiger Woods and many more who are among the best ever in their sports.

2 p.m. – The Best of This is SportsCenter: Mascot Mayhem

From the Oregon Duck gazing forlornly at other ducks happily swimming outside its ESPN office window to the Rutgers Scarlet Knight being shoved in an ESPN hallway by WWE champion Becky Lynch, mascots have hilariously been part of TISC since the beginning. The 30-minute show remembers some of the best moments.

Since 1995, “This is SportsCenter” has given fans and viewers an inside peek at the Bristol campus with a humorous spin on day-to-day life at ESPN. The network has produced more than 400 advertising spots as part of this signature franchise.

Jerry Milani is a freelance writer and public relations executive living in Bloomfield, N.J. He has worked in P.R. for more than 30 years in college and conference sports media relations, two agencies and for the International Fight League, a team-based mixed martial arts league, and now is the PR manager for FAN EXPO, which runs pop culture and celebrity conventions across North America. Milani is also the play-by-play announcer for Caldwell University football and basketball broadcasts. He is a proud graduate of Fordham University and when not attending a Yankees, Rams or Cougars game can be reached at Jerry (at) JerryMilani (dot) com.
@gbpackjerry
Previous Greg Norman Hosts Another Special Live Edition of His SiriusXM Show on May 26
Next WTT Moves 2020 Season To W. Va., Matches On CBS, ESPN, Tennis Channel, WTT.com