Home / News / Mikaela Shiffrin: Peak Season, A Documentary On The Woman Behind The Wins, Debuts Monday On NBCSN

Mikaela Shiffrin: Peak Season, A Documentary On The Woman Behind The Wins, Debuts Monday On NBCSN

Jerry Milani January 23, 2018 News, On The Air Comments Off on Mikaela Shiffrin: Peak Season, A Documentary On The Woman Behind The Wins, Debuts Monday On NBCSN 2,595 Views 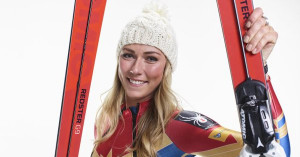 A film crew from Red Bull Media House followed Shiffrin around the world, from Paris, to Chile, to Utah, and caught a glimpse of the tremendous success and attention the 22-year-old received during her 2017 season. The candid documentary shows the hours of work, the occasional mental and emotional struggle that comes along with being expected to win, and the fun side of being a young woman growing up in a highly abnormal situation.

From chasing snow around the globe to chasing romance with her ski-racing boyfriend, Mikaela Shiffrin: Peak Season gives viewers the most intimate look into Shiffrin’s life to date.

For a preview of Mikaela Shiffrin: Peak Season, click here.

Jerry Milani is a freelance writer and public relations executive living in Bloomfield, N.J. He has worked in P.R. for more than 30 years in college and conference sports media relations, two agencies and for the International Fight League, a team-based mixed martial arts league, and now is the PR manager for FAN EXPO, which runs pop culture and celebrity conventions across North America. Milani is also the play-by-play announcer for Caldwell University football and basketball broadcasts. He is a proud graduate of Fordham University and when not attending a Yankees, Rams or Cougars game can be reached at Jerry (at) JerryMilani (dot) com.
@gbpackjerry
Previous SiriusXM To Cover 2018 PGA Merchandise Show
Next Vonn, Miller, Davis, White Among New Topps Olympic Trading Cards