Home / News / Could The Political Football That Is Soccer’s World Cup Land 2022 In The U.S.

Could The Political Football That Is Soccer’s World Cup Land 2022 In The U.S. 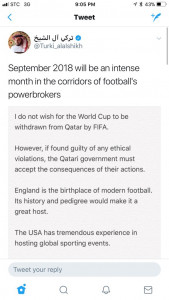 As we move from the window of the Olympics and set sights on the next big global event this summer; the World Cup in Russia, another battle for the NEXT World Cup, which has been awarded amidst much controversy and continued political infighting to Qatar could be coming into focus.

This past weekend Turki Al-Alshaikh, head of Saudi Arabia’s General Sport Authority (GSA), issued a curious tweet (originally shared in the U.S. by Bloomberg’s Scott Soshnick), saying that maybe, if there are continued issues with Qatar, the Games could be moved to the UK (which has been mentioned before) or even The United States, which many had said would be ready for the Games given the history and infrastructure that already exists. While it is the longest of long shots, and a massive political storm that could arise should the World Cup be shifted to either the UK or the U.S., floating the idea seems to be more than just an idle tweet, especially as the U.S. preps for its 2026 joint bid with Mexico and Canada, a bid which many insiders, and current World Cup rightsholder in the U.S. FOX Sports, feels is the best shot, especially with the new regime at USA Soccer now moving into place.

The ramifications for brands and media partners at this stage for 2022 moving, not to mention the billions already committed to build stadia and other facilities, could be massive.  Where it all goes, let’s see what comes next.

Jerry Milani is a freelance writer and public relations executive living in Bloomfield, N.J. He has worked in P.R. for more than 30 years in college and conference sports media relations, two agencies and for the International Fight League, a team-based mixed martial arts league, and now is the PR manager for FAN EXPO, which runs pop culture and celebrity conventions across North America. Milani is also the play-by-play announcer for Caldwell University football and basketball broadcasts. He is a proud graduate of Fordham University and when not attending a Yankees, Rams or Cougars game can be reached at Jerry (at) JerryMilani (dot) com.
@gbpackjerry
Previous Poker Night LIVE To Debut March 20 On CBS Sports Network
Next CBS launches CBS SPORTS HQ